This Sunday, a number of “Strong” events will take place around the country. These events have been organised as a response to the murder of Lee Rigby and are supposed to be against extremism but many have been hijacked by the EDL, the neo-Nazi Infidels and the BNP. Nottingham Strong fell apart after it was exposed as being an EDL front group. A Mansfield Strong event, which seems to have wider support, is still going ahead.

However, the Mansfield event still has extensive links with the EDL. Whilst the Nottingham and Mansfield EDL divisions have learnt from previous exposure not to openly promote the event, the EDL’s Mansfield organiser is involved in organising Mansfield Strong and many local EDL activists from across the region will be attempting to infiltrate the event on the day. 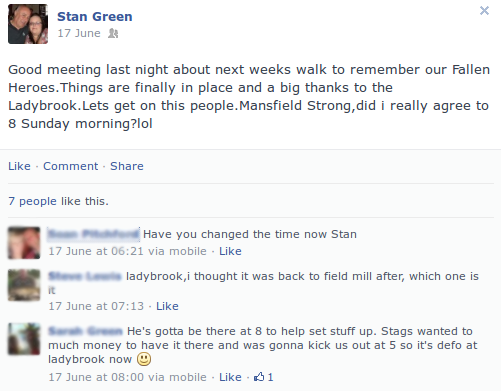 Stan Green, the Mansfield EDL organiser, has made numerous posts on the Mansfield Strong page suggesting that he is involved in the organising meetings and in logistics on the day. Stan, once a key member of the East Midlands Infidels, has been to numerous EDL demos with the East Midlands divisions. On his Facebook profile he describes himself as “ENGLISH DEFENCE LEAGUE.MANSFIELD DIVISION” and has shared photos promoting the more openly Nazi group Infidels of Britain. 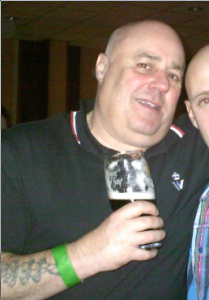 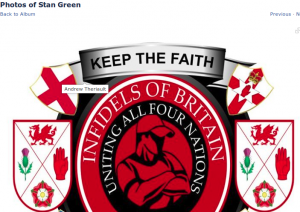 As well as EDL activists being involved in organising the event, quite a few have said they will be turning up on the day. These include Nottingham’s Chris Payne and Nicky Long who were convicted of anti-Muslim public order offences for leaving a pig’s head at the site of a mosque in West Bridgford. Payne urged the organisers of Mansfield Strong to inbox him, presumably wanting to get further involved in the event. 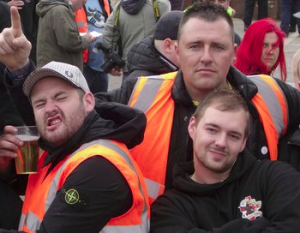 No far right mobilisation would be complete without former EDL speaker and currently Midlands organiser for the English National Resistance, Tony Curtis, making an appearance. Keen to piggyback on something with more than a handful of people involved, Curtis has declared his support for the event. Other EDL activists saying they will come include Adam Bilyk (Nottingham), Dave Stokoe (Long Eaton), Ian Gilbert (Alfreton), Kev Coates (Mansfield), Tip James (Mansfield) and Tracie Bird (Derbyshire).

These exploitative infiltrations are not limited to the Midlands. Brighton Anti-fascists have documented the close links between the Brighton Strong event and the local EDL division. We do not believe these are the only events where there is secret far right involvement.

In the aftermath of the murder of Lee Rigby, his family have pleaded for groups like the far right EDL not to exploit his death. The armed forces charity, Hope for Heroes, has refused to accept donations from the EDL in order to distance themselves from the group’s anti-Muslim politics. In spite of these wishes, the EDL continues to attempt to exploit the tragic murder of Lee Rigby in order to recruit people to events and spread anti-Muslim conspiracy theories. Whether they are setting up Facebook pages to lure people into their sphere of influence or organising memorial events, far right activists have shamefully used Rigby’s murder to expand their political influence.

Further evidence that “memorial” events were an EDL front

We ask the other organisers of Mansfield Strong to resist attempts by the EDL to infiltrate their event. We hope that they make it clear that the EDL and other far right groups are not welcome.

On Saturday the East Anglian Patriots bussed a couple of hundred fascists into Lincoln for a demo that threatened violence against Muslims and sought to deny freedom of workship in the city. An anti-fascist counter demonstration was also held. The fascists, led by a Lincoln Infidels banner, chanted “Burn the mosque” and “Allah is a paedo”. The Infidels are an openly Nazi splinter from the EDL. 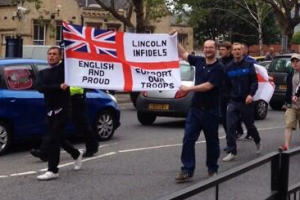 They also listened to speeches from people including “Wolfie” Smith, a man whose speciality seems to be inciting racial violence. He recently posted “DEATH TO ALL MUZZIES KILL THEM ALL” and “BURN EVERY MOSQUE IN THE COUNTRY … BURN THEM ALL WITH THE MUZRAT SCUM IN THEM”. He has also referred to Muslims as “SAND NIGGER[s]”. The local organiser was an EDL supporter called Alex Banos who has previously said that if the mosque is built it will be “coming down”. 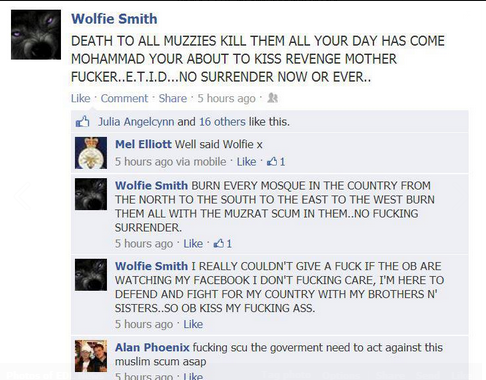 The march was organised by a group of former EDL members calling themselves the East Anglian Patriots. The EAP and their supporters clearly share Wolfie’s views. On hearing the news about the murder of Lee Rigby the EAP posted about Muslims that “THEY’VE KILLED ONE OF OUR BOYS IN WOOLWICH … KICK THE BASTARDS OUT NOW!” When reporting that Gillingham mosque had been attacked in revenge their followers posted “Throw boiling tar over them set fire to them” to which EAP responded “Happy days!”. “Great news keep on lads” posted another fan, “yes this is a start in the right direction” and “I would be out whipping some muzzie ass all over town tonight”. Other responses on the page included this from Wendy Wooley: “Kill the fucking lot off them if you want just give me a gun and I will do it point blank straight in the head”. Lj High: “march on the muslim areas and kill them all…..” 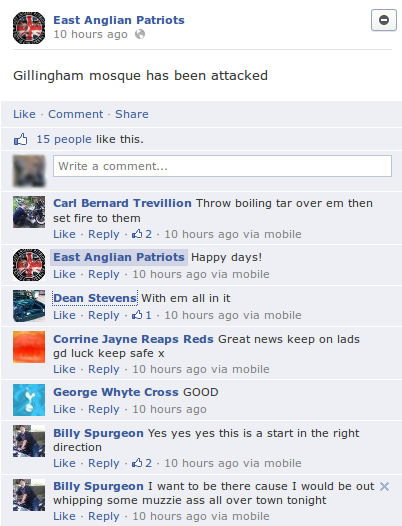 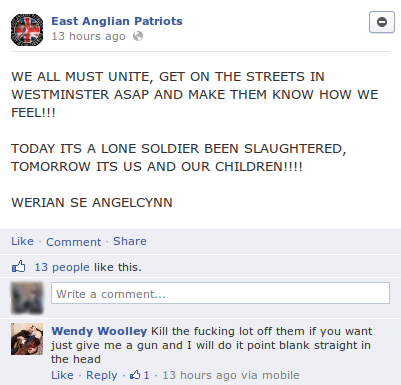 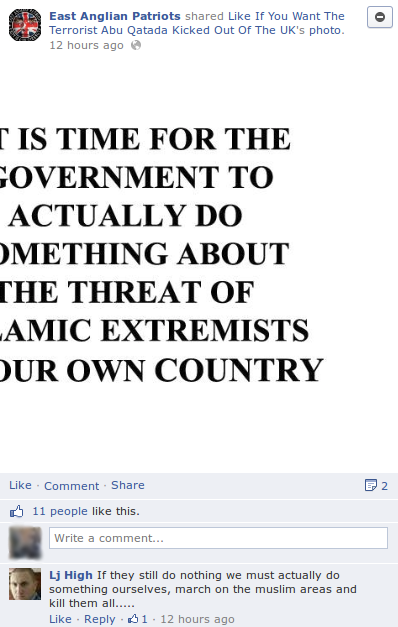 These are people who support arson, murder and genocide as a response to the Lee Rigby murder. Just like how the men who killed Rigby saw all British soldiers as the enemy, these “patriots” see all Muslims as the enemy and would be happy to see them ethnically cleansed.

The EAP were pleased with the turnout in Lincoln and have said they will be back. They are also organising a demonstration against the Skegness halal slaughterhouse on Sat 6th July.

We cannot sit back and let these fascists gain support and win the argument simply by shouting the loudest. There has been a 10-fold increase in attacks against Muslims since the Woolwich murder, including numerous arson attacks against mosques. The threats being made by groups like the EDL and the EAP are not idle talk – these people mean to act on them.

We need a well-organised anti-fascist response to forthcoming demos by working in the local communities and linking up with wider anti-fascist networks for support to prevent these people getting a platform for their sick views and incitement to violence.

On Sat 1st March the EDL organised “memorial events” up and down the country in a disgusting and exploitative attempt to make political gain out of a brutal murder. One of those was held in Nottingham. In the Nottingham Post’s write up of the event they chose to focus on the question of whether it really was the EDL organising the event or not, rather than the exploitation of a man’s murder to whip up hatred against the Muslim community. The fact is that the event was timed to coincide with a load of other events organised by the far right group and was openly advertised on the Nottingham EDL Facebook page. 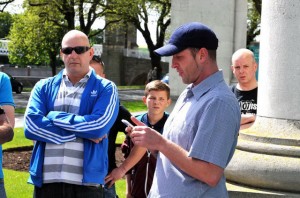 Let’s be quite clear – there is no doubt that this was organised by the EDL. The organiser, as quoted by the Post, was none other than Jay Clark, former organiser of the Nottingham EDL division who is still very much involved in the group’s politics. Despite his attempts to disassociate himself from the EDL, Clark led their contingent at Nottingham’s St George’s Day march last year and organises St George’s Day events in Clifton with East Midlands EDL members. He has threatened to “wipe out” independent media websites in the past for making clear the links between himself and fascists. 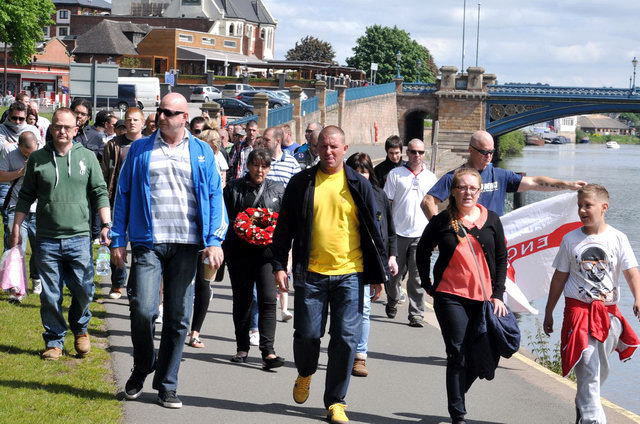 Alongside Clark were other prominent Nottingham EDL members. Donna Walker laid their wreath flanked by Adam Bilyk (last spotted at the English Volunteer Force launch in Birmingham) and Emma Laker. Whether these people still consider themselves EDL or just fellow travellers, their  anti-Muslim agenda differs little from that of the official EDL line.

EDL events in Leicester and Nottingham

On Saturday, the EDL held events in towns and cities across the country, as part of their new spike in activity following the murder of Lee Rigby in Woolwich on May 22nd.  Having realised that the pissed-up argy-bargy at their national demos in Newcastle and London the previous weekend hasn’t exactly helped their image, the EDL played these local events differently.  They were all branded as memorials, and participants were urged to stay sober, refrain from chanting or shouting, and to carry no banners or “colours” (that’s branded hoodies to you and me).

In Leicester, around 80 joined the EDL-organised march from the Clock Tower to the war memorial in Victoria Park, where flowers were laid.  A UAF counter-demo of about the same size stood with banners at the Clock Tower, with some heckling of the marchers as they departed, but without further incident.

In Nottingham, about 70 walked from the Trent Bridge Inn to the war memorial on the Victoria Embankment, again laying flowers.  Not wishing to interfere with the flower-laying, a group of about 30 anti-fascists stood quietly with banners on the opposite side of the road from the memorial.  Apart from one aggressive EDL supporter who was restrained by police, there was no interaction between the two sides.

The EDL successfully stayed sober and calm on both these events, and achieved their objective of appearing “reasonable and respectful” – something they are generally find beyond them.  It’s concerning that they appear to have attracted numbers to these commemorations beyond their usual activist base, and not everyone who attended Saturday’s events would have thought of themselves as an EDL member.  In other words, they are having some success at rebuilding their numbers and activity, and are expanding their support base.

The gruesome murder in Woolwich has been a gift for the EDL, allowing them to capitalise on a personal tragedy and surf the wave of outrage for their own ends – despite appeals from both Lee Rigby’s family and his regiment that no racist capital should be made by political groups from his horrible death.  The EDL and other fascist groupings will be working hard over the next few months, and anti-fascists must remain vigilant and keep developing strategies to counter their activities in this challenging time.