EDL splinter group, the East Anglian Patriots (not to be confused with the East Anglian Patriotic Front or the People’s Front of East Anglia), have announced that they will hold a demonstration in Lincoln on Saturday 8th June at 1pm. They are protesting the building of a mosque on the site of a disused dairy because they don’t believe in freedom of religion.

Just in case there’s any dispute about whether or not the organisers of the demo are EDL or not, here’s what they are saying on Facebook:

Unsurprisingly, the promotional material for their event is littered with factual errors and half-truths. To start with they state that the mosque will cost £0.5m to build whereas the actual figure is close to £1m (and it’s going to be paid by the local Muslim community anyway, so why do they care?) The former EDL members twist the truth mercilessly by saying that “Local residents have objected but as usual their pleas have been ignored.” In actual fact, local residents group Boultham Residents’ Association initially objected to the plans on the basis of the increased traffic that would be brought to the area, but came out in support of the final plan, which included 68 parking spaces for worshippers. Lincoln Council only received five letters of objection, “mostly about concerns over traffic congestion”, while six letters were sent in which backed the project.

Chair of the Boultham Residents’ Association, Jean Flannery had some very positive things to say about the scheme that seem to demonstrate that local people are accepting and welcoming of the mosque and the Muslims who use it:

We need to move forward together. Now, our joint task is to foster understanding and acceptance of one another.

Misunderstandings may cause difficulties and anxieties but they can be corrected.

We already live and work alongside one another.

Individual and working relationships are the norm for many. We have our differences but we also share more similarities.

By far the majority of us surely wish to live in harmony. To my mind the way to accomplish this is to develop and expand relationships to fully include the wider community, in which we all share.

It seems that it’s the far right protesters who are riding roughshod over the desires of the local community and trying to impose their own agenda. 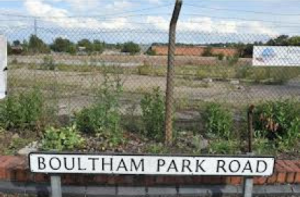 “Our way of life, our faith, our very existence is under threat from this Islamic encroachment” the East Anglian Patriots’ poster shrieks hysterically, although it’s not at all clear how turning a derelict wasteland into a mosque is going to do that. The Lincoln Islamic Association has compelling reasons for needing a larger mosque, saying “We now have approximately 2000 Muslims in Lincoln and surrounding areas. Our current Mosque capacity is only 60.” The truth of the matter is the demonstrators are mostly anti-Muslim and racist people from out of town (Lincoln is not in East Anglia) who want to divide communities along lines of race and religion.

This demonstration and its politics of intercommunal violence should be resisted.

« Election nightmare for BNP
Another blackshirt in Derbyshire »