The recent arrests of members of EDL splinter group, the Infidels, have raised the profile of this tiny far right protest group. Anti-fascists might be wondering whether the Infidels have a local presence and what kind of threat they pose. We did the dirty job of scouring their websites so you don’t have to. Here’s the deal:

These guys go for an old school white supremacist vibe, devoid of punctuation or grammar: “The futures bright the futures white ktf ns!”, “Unite the right to be white”, “white white white is right kick them and fight fight fight”, etc. As with many of their fellow on the far right, the urge to write bloody awful racist songs and ‘poetry’ cannot be suppressed: 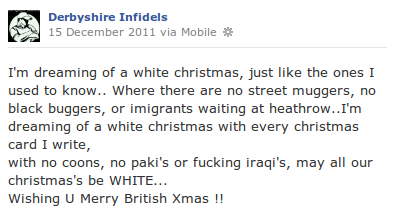 They say they are “sometimes violent” and use fascist imagery of fighting for the white race, etc. So are they a threat? 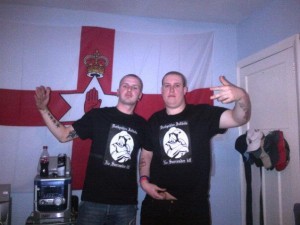 These fellas are more happy to show their links to Nazism, littering their posts  with “14w” (reference to a 14 word phrase codified by David Lane, leader of white separatist organisation, The Order) and “88” (8th word of the alphabet is H, HH stands for Heil Hitler). They think that “jew scum took control of the uk/world media” and are obsessed with anti-semitic conspiracy theories and holocaust denial. Fortunately they seem like too paranoid a bunch of lunatics for most people to show the slightest bit of interest in them and have to resort to liking their own posts. 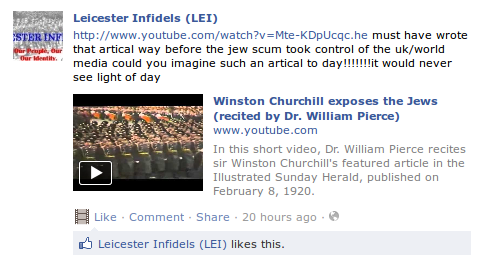 A relatively new Facebook group that seems to have aroused very minimal support. Set up by Phil Murfet, a Notts County fan whose speciality is rape jokes, race hate jokes and jokes about Tommy Robinson involving race hate. ” ‘Sex with someone who doesn’t want to is rape’ … I call it marriage” the little charmer wrote in a recent status update. Another recent ‘joke’ called black people at KFC “native, wild black members in their home tribe” an “uncivilized group” who “sloppily munched into their food”. Little Miss Murfet refers to Tommy Robinson as a “fenian” funded by “jew boy” Alan Lake. A nasty piece of work to be sure, but without any support. 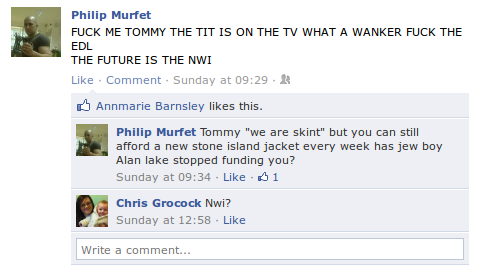 What is noticeable about all of these tiny Facebook fan pages is that they have very little local support and seem capable of very little independent action.  They are full of links to the North West Infidels, British People’s Party and National Front and their members occasionally report going to fairly small demonstrations in the north. In short, although they love to think of themselves as the hardcore street army who have had enough of what they see as the multicultural, Zionist, Irish-led EDL, they will always be in its much larger shadow.

The threat of more militant, hardline fascist groups like these is not that they might have any mass influence, but that they might give rise to future ‘lone wolves’ – radicalised individuals who resort to violent atrocities in order to ‘fight back’ against ‘the Jewish conspiracy’, ‘multiculturalism’, ‘cultural Marxism’, ‘Islamic takeover’ or whatever their current bogeyman is. We have had homegrown Breiviks in the past – David Copeland, Martyn Gilleard and Robert Cottage spring to mind.

Fortunately the Infidels phenomenon does not seem to have taken off in the Midlands and the police raids on several of the leaders of the movement in the north and London will hopefully dampen their spirits. However, we should not be complacent. These fascists need to be stamped out.

« Nottingham fascists on St. George’s day
Why liberal ‘anti-fascism’ is a mistake, Part 1 »

2 Responses to “Infidels or imbeciles?”