On Saturday, BNP and EDL supporter Dean Everitt wheeled out the sequel to his Boston anti-immigration protest. The anti-immigration protest in Spalding was timed to fall on the anniversary of Enoch Powell’s famous race-baiting “Rivers of Blood” speech, which is no surprise given the politics of those organising it. 150 people turned up to the call for “No more immigration” which was a disappointment for the organisers who had hoped to build on the larger number at the Boston event. Again, the main speakers were UK Independence Party candidates fishing for votes.

The provocative link that was made to Powell’s speech should give some idea of what motivates the organisers of these events. “Enoch Powell was right” has long been a rallying cry for the far right and the former Conservative MP has been lionised by white power advocates. At the time of the infamous speech The Times said that Powell had “appealed to racial hatred” and he was immediately sacked by Edward Heath for inflaming racial tensions. Powell’s speech was a reaction against the introduction of the Race Relations Act which made it a crime to refuse housing, employment or public services to a person on the grounds of their colour, race, ethnic or national origins. Powell was opposed to equality, suggesting that it would lead to a situation in which “the black man will have the whip hand over the white man” as opposed to the other way around which he found acceptable.

The organiser of the Spalding protest, Dean Everitt, has made similarly alarmist statements in the past saying “The British person is being discriminated against in their own country” and that “We are not racist…  but we are saying this place is now full and we should not have any more [migrants].” He is similarly scare-mongering and is merely afraid of losing his privileged status. Rather than see the problem as the capitalist system that only takes the cheapest workers and throws everyone else on the scrapheap, Everitt blames the hyper-exploited workers instead because they are an easier target for him to take his frustration out on.

Let’s hope this ugly movement is on the way out.

After months of baiting anti-fascists, the gobshites of the far right were weeping into their pillows last night after they were run out of Brighton yet again. Despite hyping the event as a big one and fantasising about what they were going to do to the ‘reds’ they only mustered 150 flag-waving morons at their march to nowhere. The following report is from a local anti-fascist who was there to send them packing:

We knew the fash were worried on Saturday night when Jeff Marsh started tweeting that the Casuals “owned Worthing”. If they were really such big men why didn’t they come down into Brighton where anti-fascists had been leafleting and band after band at the Punx Picnic was calling the punters out to oppose the fascists? The man was clearly close to losing his bottle and going where he wanted which was home with a nice cup of Horlicks. We could sleep easy knowing that our enemies were bricking it. 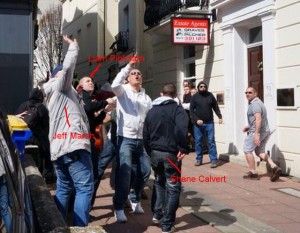 We woke up to a lovely sunny day and slowly wandered down towards the pier where a mob of black clad antis were avoiding the kettle and forming quite a sizeable crowd. The word was that fash were being allowed to walk through town to the demo which turned out not to be a particularly clever policing decision as several groups of them were set upon before they’d even got to the march in a sign of things to come. Soon there was a massive surge up St James street because some fascists had been spotted in a betting shop. The group of 3 far right punters were soon surrounded by hundreds of anti-fascists and were only saved by running for their lives out of the back door and a horse charge by the plod.

The miserable gaggle of wankers were walled in on the seafront for their own protection whilst thousands of Brighton people from all walks of life turned out to tell them to fuck off. Meanwhile odd groups of those who were clearly out intent on getting at the reds wandered in the maze of the Lanes but kept getting turned over by the better organised and more up for it anti-fascists who were given confidence boost after confidence boost by opposition whose hearts clearly weren’t in it.

In the end the fash didn’t even manage to stagger the whole length of their 250m pig pen before they were turned back for their own safety. They huddled looking miserable while being pelted with missiles and wishing they could go home. Sensing that their job was done anti-fascists went on a victory march through the centre of town having well and truly beaten the fascists of the streets.

Word came through that some isolated fascists were trying to cause mischief down near the pier so we went to investigate only to see a pitiful mob of beer bellied has beens who’d finally drunk enough to get the courage to kick off. They were quickly surrounded by anti-fascists and only saved by scores of riot cops wading in to keep the sides apart. Apparently they were Combined Ex-Forces but I don’t think any of these lads would’ve passed any physical tests! They were marched off in a kettle surrounded by jeering anti-fascists and looked pathetic.

The funniest moment of the day came as we were moving away into the side streets as we came across a fascist so paralytic he could barely stand who eventually got it together enough to run off. It was then that people recognised his obviously terrified mate was none other than Diddyman Shane  Calvert. The poor old Nazi looked like he was about to cry as he scurried away behind police lines to shouts of “Come back Diddyman you paedo!” Seems like the mighty infidels are having a few recruitment problems these days and it’s no surprise. The NWI love to give it large on the internet but they shouldn’t really leave home without their mums for protection!

It was time to retire to the pub for refreshments after a day’s work well done. It was clear that the “hard men” of the far right had been totally humiliated. The normally full of shit @CasualsUnitedNT was lost for words for hours during what was meant to be their most exciting day of the year and Jeff Marsh hasn’t re-emerged from hiding to cover his arse yet. They are talking about coming back next year with more people but they already tried that this year and it didn’t work out too well for them. The fact is dregs of the EDL simply can’t get it together any more and they have learnt the hard way. They may be making big speeches about no surrender but I am sure that they won’t really want a rerun.

Check out the write up from the Anti-Fascist Network as well. 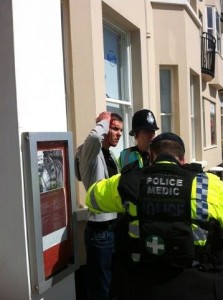 Casuals United confirm that they are fascists

Us anti-fascists have heard no end of whingeing from the 10 men and a dog who are Casuals United over the years, usually starting with “But we’re not fascists!”. The latest example was when failed far right kingpin, Tony Curtis AKA Tone the Moan, leapt to the defence of the Casuals godfather, Jeff Marsh, claiming that he’s against people with extreme right wing views. Well, no one needs to pretend that these muppets aren’t fascists anymore because Leicester Casuals United have kindly confirmed the fact for us.

This just confirms what anti-fascists have been saying for ages about the March for England in Brighton this weekend – that it is a fascist mobilisation against ‘lefties’ with a not very convincing patriotic disguise. In case you need more evidence, here’s something the Anti-Fascist Network found on Facebook: 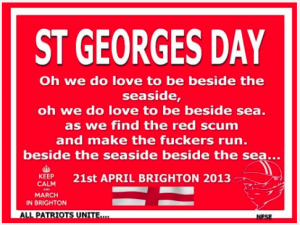 Travel down with your local anti-fascist group and make sure that these fascists look very silly indeed.

Comments Off on Casuals United confirm that they are fascists   |  tags: Brighton, Casuals United, MfE | posted in Leicestershire

Derbyshire BNP have only mustered 4 candidates for the County Council elections next month. The same tired old faces are:

In 2009 they fielded 17 candidates and the NF fielded one. It’s another poor showing for the fascists.

Now that they are all announced we can see just how badly the BNP are doing in terms of putting up candidates compared to their campaign in 2009. Back then they fielded 115 candidates in the 5 East Midlands counties. This time they’ve only managed to find 27 willing to stand – less than a quarter of the 2009 figure. It can’t be money for deposits that’s the problem because the party has been trumpeting about the generous bequests it’s been receiving from its elderly supporters in recent months. The fact is that members have left the party in droves so the remaining organisers are scrabbling around desperate to find someone, anyone, who will stand for them.

The nominations are in for Lincolnshire, Northamptonshire and Nottinghamshire County Council elections. In all three counties there are fewer BNP candidates than in 2009 suggesting the party’s support has collapsed across the region. 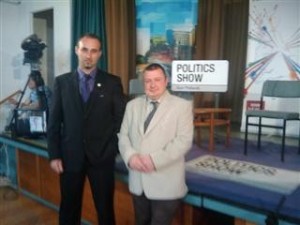 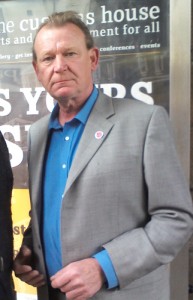 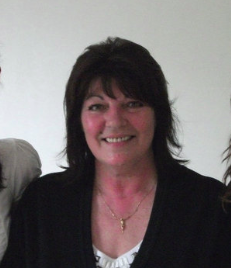 Three teenagers from Loughborough, who are believed to be far right extremists, have appeared at the Old Bailey accused of plotting terrorist bombings. They had partly assembled pipe bombs when they were arrested in February last year.

The accused were found in possession of components for pipe bombs, a crossbow, air rifles and, ironically, the Mujihadeen Poisons Handbook as well as a “notebook containing information about the planning of attacks and the construction of explosive devices”. The three are being prosecuted on a number of charges including “possession of articles for purposes connected with terrorism”. The charge sheet states that the components of the bombs were possessed “with intent to endanger life or cause serious damage to property”.