Yesterday’s demonstration against immigration in Boston seemed to have been a moderate success for the right. In the end, the protest drew 150-300 people according to the Boston Standard. The event seems to have been dominated by local UKIP politician, Chris Pain, whose party’s flag was prominently positioned behind the speakers. Indeed, most of the placards displayed an anti-EU sentiment rather than outright xenophobia. Even so, it is worrying that an implicitly anti-foreigner event has drawn such a big turnout. 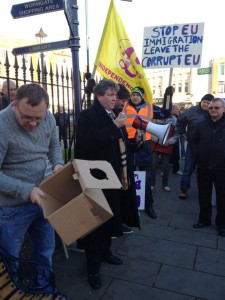 EDL members from Lincolnshire, Nottingham and East Anglia traveled to take part in the event which was also trumpeted by BNP activist Craig Farnsworth. Their relatively small and muted presence (they didn’t feel confident enough to openly display their far right affiliations) was eclipsed by the better funded and more politically acceptable (to some!) politics of UKIP. However, that hasn’t stopped them from crowing about their success and how this small acorn will grow into a mighty oak and other such nonsense.

It is clear that, given the collapse of their own movements, the far right are now looking to other issues to piggyback on in the hope of finding new recruits and new forums for them to infect with their politics.  Anti-fascists need to be alert to these tactics and be countering their arguments with our own perspective on global capitalist politics. It is only where the only voices are those blaming foreigners rather than the forces of international capital that the falsehoods pedaled by the extreme right can take hold.

The apparent success of the protest has led to the inevitable unimaginative response. They are going to hold another protest in the neighbouring town of Spalding some time in the future, presumably to keep flogging this horse until it’s well and truly dead.