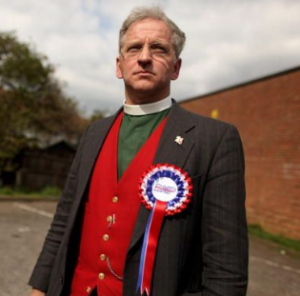 Robert West – God is not on his side!

It seems that all their leafleting in Skegness around the halal slaughterhouse has come to nothing as well. Robert Ashton, Lincoln Coastal Branch organiser stood for the BNP in Skegness South, a seat the party has not contested previously, and managed a very poor 77 votes (4.3%).

In the run up to these elections anti-fascists were pleased at the low number of candidates the BNP were standing, suggesting that the party was collapsing. The BNP claimed they were concentrating on areas where they thought they would do well. That is not turning out to be the case.

The nominations are in for Lincolnshire, Northamptonshire and Nottinghamshire County Council elections. In all three counties there are fewer BNP candidates than in 2009 suggesting the party’s support has collapsed across the region.

BNP to hold Day of Action in Skegness

Lincolnshire Coastal branch of the BNP have announced that they will be holding a “Day of Action” against the Skegness halal abattoir this weekend. They are meeting at 11.30am on Saturday 12th and advise interested parties to call 0771 4009285 to receive re direction point details.

The local BNP have been trying to exploit objections to the opening of a halal slaughterhouse for their own racist agenda since the summer and party leader Nick Griffin popped over for a demo in October. The BNP do not protest similarly cruel processes routinely carried out in factory farming or kosher slaughter, which is essentially the same as halal, choosing to focus solely on Muslims. They are not genuinely interested in animal welfare; they are just jumping on a bandwagon in the hope of getting support.

The Lincolnshire Coastal Branch is run by Robert Ashton, a “sales and marketing executive” who runs UK Indoor Cycling in his hometown of Holton-le-clay, Grimsby. He reckons the local BNP have had record numbers of enquiries since the news of the slaughterhouse’s opening was announced. We will see what this translates into on the street on Saturday. 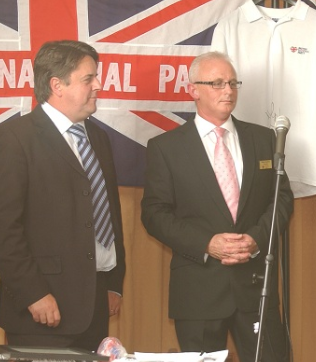 Robert Ashton gets the Griffin treatment

The BNP are not the only fascist group to have a go at latching onto the issue. The National Front went as far as holding a poorly attended national demo of has-been Nazis while confined to a park in September. Other campaigns against the slaughterhouse have distanced themselves from the far right’s fake concern, which is clearly seen as a major setback and embarrassment to their cause.