Some fascists went to the seaside

The National Front made it to the seaside on Saturday, attracting around 40 assorted fascist dregs from all over the UK to their much-hyped national demo against the reopening of a Skegness slaughterhouse.  They were confined to Tower Gardens by the police, out of the way of the general public or any opposition, where they made speeches to each other.  They are, of course, claiming the event as a great success, with fantasy claims of 150 attendees being made – think of a number lads, any number! – but were disgruntled about being kept out of the town centre and in the park, well away from anywhere most locals were likely to have seen them. They weren’t too happy about the leaking of their redirection point either. 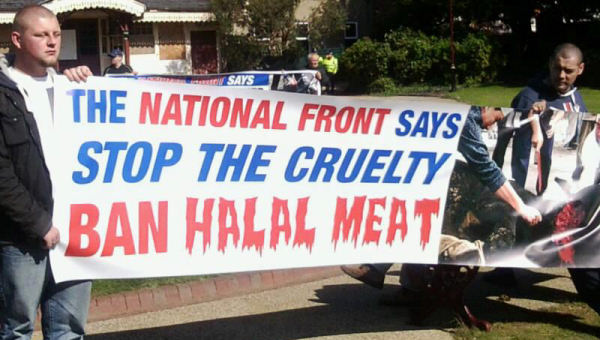 Pondlife in the park

Although the demo did not bring the NF the outreach opportunities they were hoping for, the abattoir remains a contentious issue in the town.  We must be on the lookout for further attempts (including, certainly, from the BNP) to exploit this issue for their own ends.