Nottingham’s Tony Curtis, until very recently “number 3” in the EDL after Tommy’n’Kev, has left the group, and it hasn’t been an amicable split.  His departure has stirred up a very satisfying shitstorm in the EDL, with accusations and counteraccusations being chucked about right left and centre (but mostly right!).  Curtis was a popular figure in the EDL, and was favoured as a potential leader by some discontented members, who seemed to enjoy the paranoid speeches he often made at demos; it seems that muppet-in-chief Mr. Tommy was starting to feel threatened by Curtis’s increasing prominence. 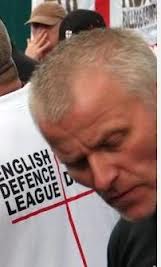 Watching the EDL go down the drain – Tony Curtis

Curtis had been working on building a new far-right grouping, the “New Patriot Alliance” (which must have ruffled Tommy’s feathers a bit)….but then Curtis decided he wouldn’t join the NPA gang because the NF were involved, and they’re too racist for his liking.  So, now he’s without a political home, caught between the far-right and the far-far-right, nursing his hurt pride and trying to work out where he can vent his anti-muslim feelings.

It will be interesting to see how this affects EDL morale in our region.  As mentioned, Curtis has made his mark in EDL circles, and his barney with tin-pot Tommy may push even more disillusioned members to show regional loyalty and abandon the group.  It’s likely that it won’t just be Curtis who’s missing from the East Midlands contingent at the next little EDL demo.

« Some fascists went to the seaside
EVF: The latest fascist brand »