A charity boxing match has been canceled following the comments made by one of the Notts Casual Infidels about the murder of Jo Cox MP.

Jamie Ray Upton AKA Daniel Hall from Mansfield, is the group’s spokesman and runs their Facebook page.

In the aftermath of Cox’s murder while others were expressing shock and disgust, Upton – presumably worse for wear after England’s victory over Wales in the Euros – responded by posting:

“We knew it was only a matter of time before we take it to the next level. We have been mugged off for Far to (sic) long.”

By the next day Upton was busily backtracking, claiming he’d been misunderstood, but the damage had already been done. His comments made the group instant national hate figures – even in the blackshirt-supporting Daily Mail. (The Nottingham Casuals rugby club had to put out a statement distancing themselves from their fascist namesakes.)

Upton was set to fight in the Ultra White Collar Boxing event at The Village Hotel in Chilwell on Sunday. The event was intended to raise funds for Cancer Research UK, but has been cancelled by the organisers.

“Everyone at Cancer Research UK was absolutely shocked and saddened to hear the news of Labour MP Jo Cox. Our thoughts are with her colleagues, friends and family.

“It has been brought to our attention that a member of a group condoning this tragic incident was due to take part in a fundraising event in aid of Cancer Research UK.

“We have alerted the event organisers and the decision has been made not to allow his participation to ensure that the event remains a safe and positive environment.”

The decision to cancel the fight may also have been influenced by a planned anti-fascist demonstration outside the event.

The other fights at the event are still going ahead and the organisers are better off without Upton anyway. His record when it comes to fund-raising isn’t great. While a member of the EDL he was  accused of “ripping off” the organisation by pocketing  funds from the sales of EDL merchandise, as well as profiteering on travel to and from demonstrations. He was also accused of  taking EDL money donated to his “North Notts” division, and investing it in a new charitable front called “stand together”.

It was their third attempt to “take back” the streets of Nottingham, and Notts Casual Infidels had threatened to “smash the reds”. On their first demo in October last year, the Market Square was taken by antifascists and refugees before they could leave the pub. They came back with 15 pitiful racists to be humiliated again later in the year but this time they had been building for months to make Saturday their big one. It was not to be. 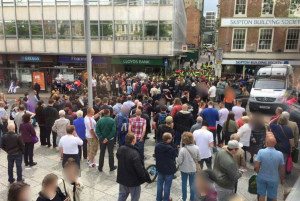 Spot the fash: Where are ya?

Despite calling favours from mates from all round the country (fascists travelled from Halifax, London and Sussex), less than 20 bothered to turn up. Despite the presence of hundreds of police to facilitate their march they were forced to hold their rally in an alley, about 50 yards from their pub, penned in at both ends by antifa and other pissed-off members of the local population. They waved a UKIP placard, and were bundled onto a bus by police anxious to get them to the station and out of town before any of them was seriously injured. It was all over by 3. 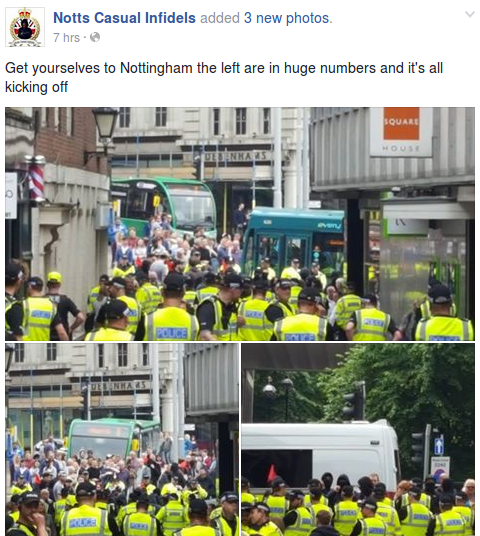 Casuals Infidels sounding very much like they’re about to surrender

It wasn’t long before recrimations were flying. Nottingham EDL’s Jack Stevens and Adam Repton were spotted by antifascists staggering out of an off-licence, moaning about how it was all organised by Nazis from out of town.  Incidentally, Repton, who didn’t go to the demo, was also seen having a long and involved chat with a suspected undercover cop.  I hope he knew what he was doing!

Then Chesterfield EDL’s John Bryan slagged off the demo’s “star attraction”, Pete Gillett, a racist bedroom ranter who came all the way from West Sussex. Bryan claimed Gillett was only in it for the money (no change for the far right there then!) and Gillett swore he wouldn’t do any more demos because “I do not want to rub shoulders with cunts like them“. Oh dear.  if you’re short of cash, perhaps you’ll have to take up the drug dealing again Pete – or try working as a Matt Lucas impersonator?

Speaking of scamming, what were the – doubtless unlicensed – Casual Infidels doing collecting donations in a Cancer Research bucket all day? Let’s just say it wouldn’t be the first time that ‘patriots’ have been involved in bogus collections of money. 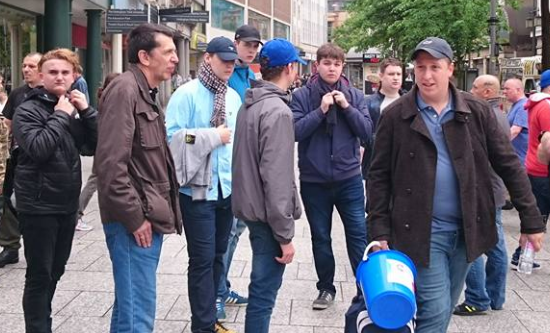 Meanwhile, antifascists had another morale-boosting day. The fascists were out-manouvered and out-numbered for the third time in a row. Their march was stopped, and no one heard their poisonous message or even saw them. Antifascists had the run of the streets and the opportunity to engage with the public whilst the fascists hid behind rows of police. It was another public demonstration that militant antifascism works and keeps Nazi scum off the streets.