The protests against a Muslim community centre on the Thurnby Lodge estate in Leicester have now attracted the attentions of the leader of the BNP. Nick Griffin parachuted in last night to quickly give a speech which he reckoned was “very well received”. He also claimed that 250 people had turned out to the most recently nightly protest against the As Salaam charity, which wants to convert a disused Scout hut into a community centre. 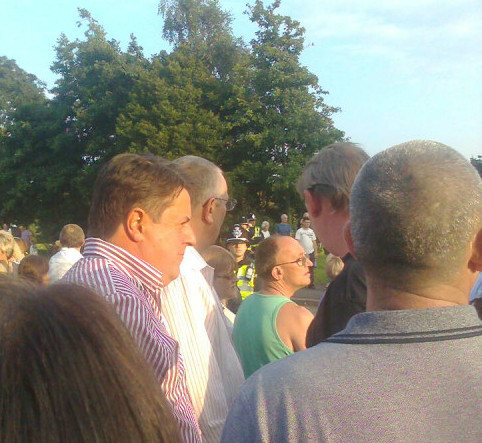 Porcine blockhead Nick Griffin swans in to hijack the protest

As we described yesterday, the protests are becoming a magnet for far right parasites, desperate to be involved in a popular campaign for a change. Also in attendance were members of Leicester EDL, Casuals United, and islamophobic group 212 Poison. Dave Hightower of the 212 has threatened to get rid of the hut on Facebook, posting “Would they use it if it wasnt there anymore?”. 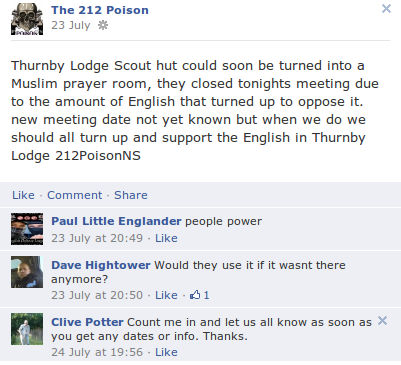 The casuals report is well worth a read:

You have got to ask yourselfes here why the Leicester EDL have gone down to 12 people. Well chanting “f*cking scum” in the middle of women and kids trying to save their estate aint helping no one. Your a f*cking disgrace and thats why the EDL on the whole have diminished in numbers. You lot might turn up for a piss-up but if it kicked off you would get f*cking slaughtered. FACT ! 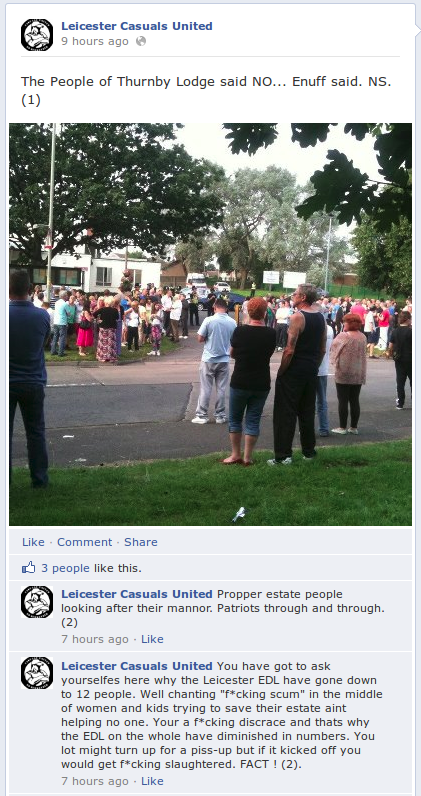 Although the infighting within the local fascist groups is heartening to see, anti-fascists need to make sure that far right groups do not get a boost as a result of these protests. Residents of Thurnby Lodge have a right to shared community resources and a say in how their community is run rather than being dictated to by Leicester City Council. Any attempts by the far right to turn this into a racial or religious matter need to be firmly resisted. We need to get an anti-fascist presence in the estate, to talk to people about what the fascists are up to and show that we genuinely support the right to community self-organisation but not the division of communities along cultural and religious lines.

Your chance to meet the lads of 212 Poison

212 Poison are meeting at 4pm tomorrow at the Goose pub on Hotel Street in Leicester to “raise a glass to H.R.H The Queen”. They’ll be joined by several of the local EDL leadership. Why not pop down to see what they’ve got planned?

Comments Off on Your chance to meet the lads of 212 Poison   |  tags: 212, EDL, leicester | posted in Leicestershire

The latest vehicle for frustrated nationalist street fighters (now that the EDL is sliding down the shitter and who are the infidels again?) is cryptically calling itself 212. There are already Leicester and Nottingham branches of the group “dedicated to defending our City, our Country and our People”. Calling themselves “Proud enemies of extremist Islam, Defenders of England, it’s history, culture and its People” they aim to “end the Muslim stranglehold of our land and our government, expose Islam for the depraved fake religion that it is and to support other pro-English-anti Islamic groups throughout the Country.”

That should give you some idea of how connected to reality these people are. Not only do they think that a religion with over 1bn followers is “fake” (no doubt all the “so-called” Muslims are actually computer-generated shape-shifting lizard people from the moon) but they also think it has a stranglehold over our government. You know, the one that regularly goes and invades Muslim countries so that it can plunder and control them and has spent millions trying to infiltrate, spy on and control its domestic Muslim population too. But what would I know – I’m just a cultural Marxist-indoctrinated sheeple after all.

Unsurprisingly, given that they subscribe to exactly the same brand of paranoid anti-Muslim nonsense, they have “met up with local #EDL lads” and found that “were all on the same page”. Indeed they’ve pledged their “support for #EDL”. Quite a few prominent EDL members have liked their Facebook pages, including Leicester organiser, Craig “Leicester”.

UK “boss” of 212, Jay Butcher, says he is “Sick to death of weekend warriors around the pub table” and reckons the solution is to “Fight!”. A graphic illustration of what they are in favour of is given in the cover for the 212 Poison page which depicts a mosque in flames whilst dispossessed Muslims watch. This is a group clearly going for the Kristallnacht vibe. Indeed, some of the recent offerings cross-posted on the Leicester and Nottingham pages show that they are more of an attack dog for the British state than a rogue cell. For example, they have posted a link to the UK Border Agency’s contact page, encouraging members to grass up suspected “ILLEGAL IMMIGRANTS”. Apparently, “High turnover of staff in Takeaways is a sure sign, any Muzi sweat shops no doubt will have a few as well. EYES OPEN PEOPLE. Smoke out the Rats.”

212, just like the EDL before them, are riding alongside the state’s crackdowns on Muslims and migrants and using them to build their vigilante gang. They threaten and maybe even carry out the work on the streets that official agencies don’t want to get their hands dirty with. Although they could well be another sad little nationalist gang that is more in love with its own butch image than actually doing anything, a change in the political environment towards a more hardline state could empower them to make their threats a reality.