With the EDL disappearing faster than a pile of coke in front of Tommy Robinson, other far right groups are trying to steal the rats jumping the ship. Nick Griffin is making a concerted effort to woo disillusioned EDL members with Zionist conspiracy tapes made in his bedroom and numerous new splinter groups are springing up. Last week we reported on the New Patriots Alliance (NPA), a Bill “Muslim killer” Baker-led outfit that tried to poach Nottingham EDL’s Tony Curtis, until he decided they were too racist for him. One of its competitors is the English Volunteer Force (EVF) which has sprouted a handful of local ‘divisions’ including one in Lincoln.

Apparently, the EVF was started in July by “EDL co-founder John Sheridan with significant backing”. This “significant” backing amounts to around 180 likes on Facebook and 60 odd people saying they will be attending the EVF’s first event in February 2013 so it’s not exactly setting the nationalist world on fire. The “anonymous” leader excites EVF enthusiast Andrew Chambers who writes:

i think the main man should be invisable to the uaf,so can,t be continually brow beaten by leftwing scum,and if the lefties don,t know who to point the finger at the leader is,nt going to have to spend half his time defending himself from character assainations by the far left and treacherous mainstream liberal media

Unfortunately for Andrew, we know exactly who “John Sheridan” is. It is the alias of former EDL leader, Chris Renton. Renton was a BNP activist in Weston Super Mare before joining the EDL and tried to make links between the EDL and Combat 18. He was outed by another former EDL leader, Paul Ray, and since then the dreaded “lefties” have been digging all kinds of shit on him. According to Ray, Renton was the EDL’s enforcer on its web forums and Facebook pages:

The groups online presence is enforced with a strong hand and any comment or hint of debate is deleted and the person who questions EDL tactics denounced as a traitor, repeated ‘offences’ by an EDL member such as the crime of questioning EDL policy or suggesting new tactics for protests that do not involve fighting the police or UAF members are met with a vicious smear campaign led by none other than the Sheridan alias himself. One woman, a 57 year old Grandmother who will remain nameless decided she would email the EDL’s leaders to give her support and offer some ideas, she was then met with a barrage of hate mail including messages from the Sheridan alias himself, many of which had a crude sexual twist to them, all of which are too shocking to print here.

Sounds like the kind of chap a good wholesome patriotic movement needs!

Renton fell out of love with the EDL some time ago and is now busy promising to lead his Volunteer Force back to the fabled glory days:

We watch on with utter disgust the absolute implosion of the English Defence League, What the fuck has happened?! From thousands of die hard warriors to a couple of hundred pissed off people, EVF will mirror the early EDL of the days of stoke/manchester/nottingham, I absolutly promise this. No Surrender Ever!

The EVF seems to want emulate the EDL without police liaison, and without the British Freedom disaster (“The EVF think politics is not the way forward”) i.e. holding flashmobs and fighting cops, Muslims and anti-fascists. They have apparently forgotten that the EDL have never managed to get more than a few hundred to their flashmobs, numbers which were never anywhere near as high as their publicly advertised demos. They are also clearly not learning from the experiences of the Infidels, who tried to do something very similar when they split away from the EDL, and have failed to get significant numbers to their events.

The EVF are vowing that all the money from their £30 hoodies and merchandise is going back into the organisation. Let’s hope it’s not the leadership’s drugs and booze fund this time!

Bizarrely, for a group called the English Volunteer Force, they are going to a troops homecoming parade in Bridgend, Wales, in October. At least the EDL made up a Welsh Defence League before showing their faces west of the border.

The EVF are not shy about saying they are against all Muslims:

Whilst we stand against Militant Islam, We do however feel militancy is deeply embedded in Islam as a whole, Within their ideology and in the way practicing Muslims conduct their lives and by the way the vast majority choose to not integrate with our core values…

We are absolutly convinced this country is currently being Islamified.

…err, right. Their response to this “Islamification” is going to be a demo in Trafalgar Square next February, but we reckon the 65 boneheads who’ve agreed to turn up so far are going to look a little lost. 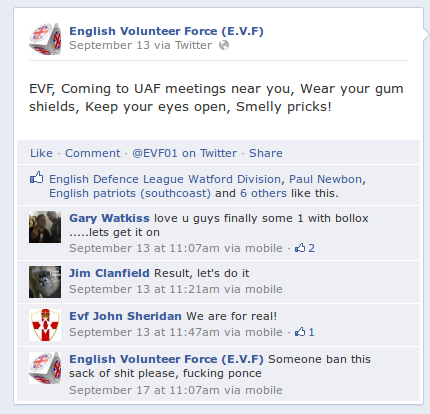 The EVF website’s “policies” section carries a fairly hilarious smear of their anti-fascist opponents as well:

We see the Far-left and the politically funded Anti-fa and Unite Against Facism (UAF) as a great danger to our country as we believe they have created the conditions that have permitted Muslim extremists to push our laws to their boundries.
These people have absolutly no morals whatsoever, They are simply deluded and extremly dangerous

This is a bit rich coming from a group that takes inspiration from the Ulster Volunteer Force, a loyalist paramilitary group in Northern Ireland that murdered over 400 civilians during it’s campaign of executions and bombings. They followed the maxim that if “you couldn’t get an IRA man you should shoot a Taig” according to their leader Gusty Spence. In 1971 the UVF carried out the McGurk’s Bar bombing which killed 15 Catholic civilians and in 1974 they planted bombs in Dublin and Managhan that killed 33 people and injured around 300. During the mid-’70s, a unit of the UVF dubbed the Shankill Butchers carried out a number of murders of Catholic civilians in which victims were abducted at random, beaten and tortured before having their throats slashed. In 1994, UVF members carried out a machine gun attack on a pub in County Down on the basis that its customers were watching the Republic of Ireland playing in the World Cup and were assumed to be Catholics. Six people were killed.

The UVF were also involved in dealing drugs within the Protestant community, and according to Alan McQuillan, assistant director of the Assets Recovery Agency, this dealing “is generally run for personal gain by a large number of people”. Ex-policeman Colin Robert Armstrong, whose luxury homes were seized in a high profile drugs case, had links to the UVF.

The EVF, then, is part of the move towards a more racist and violent mode of operation in the far right, following the collapse of the EDL. This realignment hasn’t worked for the Infidels and we fully expect the EVF to follow them into obscurity.

This entry was posted on Wednesday, September 26th, 2012 at 17:31 and is filed under . You can follow any responses to this entry through the RSS 2.0 feed.

One Response to “EVF: The latest fascist brand”