The aptly named Joshua Bonehill-Paine has been hauled in front of Yeovil Magistrates Court for instigating an internet hoax about a pub in Leicester banning military personnel. 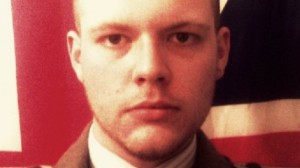 Bonehill-Paine is “the founder” of website The Daily Bale (“a news source which cares about the British people”). The site modestly claims that Bonehill-Paine “is now recognised as one of Britain’s most relentless and fearless names in the fight against left wing political correctness and left wing fascism, racism, intimidation, manipulation and left wing fascist bullying of the British people.”

Bonehill-Paine used the website to claim that The Globe had banned British armed forces, allegedly to avoid offending the immigrant population. This was, of course, a complete fabrication.

Bonehill-Paine’s lie attracted interest from all the usual mouth breathers and there were threats to firebomb the presmises and attack or kill staff. According to Chris Bulaitis, managing director of the pub group, “We had over 1,000 calls on the Saturday of people threatening to firebomb the pub, beat up the staff, who believed, absolutely believed, that we had banned military personnel. The only thing we could do was shut the pub for the safety of the customers and our staff.”

It will come as little surprise to anybody who casts even a cursory glance over the Daily Bale, but this was not Bonehill-Paine’s first hoax. According to the BBC:

Bonehill-Paine and the Daily Bale have been responsible for other false claims published online but he has not been prosecuted over these.

Last year his website created a hoax missing person poster, claiming a six-year-old girl had been “kidnapped by an Asian grooming gang”.

The hoax poster went on to be shared thousands of times on Facebook and Twitter, with many people believing the claim to be true.

Speaking to BBC Asian Network, Bonehill-Paine said he wanted to create “a shocking campaign” that people would “share quickly on social media”.

Another article posted on the website in September falsely claimed an Asian youth had punched a two-month-old baby twice in the face, then thrown the infant against a brick wall in Middlesbrough. It contained a graphic photo of an injured baby.

The 21-year-old, from Yeovil, admitted one charge of malicious communication. The hearing was adjourned and Bonehill-Paine will be sentenced on 4 April.