Happy new year antifascists! Hackers Anonymous have got the 2012 off to a good start with Operation Blitzkrieg, a sustained assault on neo-Nazi websites in order to expose the fash.

One of their targets was the infamous Blood & Honour network, which promoted Nazi gigs and bands and was linked to wannabe stormtroopers, Combat 18. B&H was founded by Ian Stuart and took its name from the motto from of the Hitler Youth. In the early ’90s the East Midlands division of the group was active in promoting gigs around the region. Thankfully B&H’s humiliation by antifascists at the ‘Battle of Waterloo’ (the London railway station, not the Belgian town), which is amusingly retold in No Retreat, and Ian Stuart’s fatal encounter with a Derbyshire ditch took a lot of the wind out of their sails. However, the group is still active and organises occasional highly secretive gigs in dingy shitholes around the country.

A complete leak of personal details from the UK B&H website can be found here. There are quite a few names from the East Midlands on there, including BNP councillor, James North. North is the BNP’s representative on Asfordby Parish Council (Melton, Leicestershire) and appears no less than 3 times on the leaked list along with his ‘stallion’ email address (lol). James was a rising star for the BNP in Leicestershire and regularly chairs their meetings and gives presentations to other branches as well as writing articles for the BNP website. The revelation that he was a signed up member of an openly Hitlerite organisation will no doubt cause him a few image problems. The BNP is already in freefall in Leicestershire, having lost a number of councillors at the last elections and now being forced to merge branches due to insufficient interest. This damning detail about the formerly squeaky clean North will put him alongside Ian ‘NF plank’ Meller and Wayne ‘racist torture’ McDermott as yet another embarrassment. 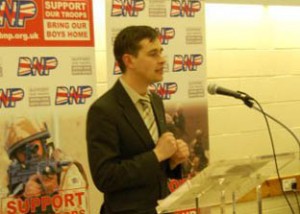