As the NF work themselves up into a frenzy about the importance of their national demonstration in Skegness, we thought it might be good to let the world know what a bunch of Nazi dregs will be turning up on Saturday.

Aging Nazi from West Yorkshire, renowned for grassing up his fellow fascists and running away whenever militant anti-fascists turn up to give them a kicking. Kev is the man behind Nazi hitlist website Redwatch, which posts pictures and the personal details of people who turn up to anti-racist and trade union events in the vain hope that other fascists will do something about them. He has quite a history of involvement with fascist groups in Leeds and Bradford, including the BNP and Combat 18. More recently he was the leader of Nazi groupuscle, the British People’s Party, best know for paedophilia and bomb making. Oh yeah, and opposing hip-hop… no, seriously. 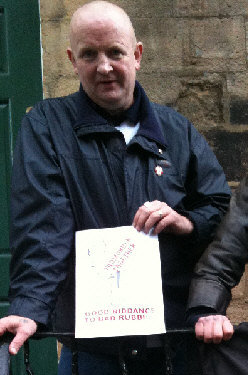 In recent times the BPP seems to have imploded over the involvement of one of its few remaining members with a Chinese Nazi. Obviously such dangerous race mixing could not be allowed by Kev. Because, like most far right factions these days, the BPP has hardly anyone in it, in recent times Kev has been cosying up to the National Front, North West Infidels, Combined ex-Forces and anyone that’ll have him. Needless to say, his reputation as a grass mean that he has many enemies even within the fascist movement, such as the author of the “White Lies!” blog:

This blog deals with Kevin Richard Watmough who has systematically damaged the movement here in the UK and will expose him for what he is. A Liar, A Cheat, A Rapist and long time Agent Provocateur. 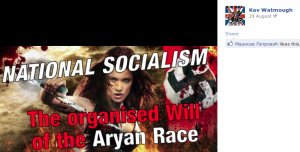 Best mates with Llama abuser, John Snowy Shaw, and number 2 in the North West Infidels, Shane Calvert AKA Diddyman, has been getting excited about a weekend in Skeggy. Best known for climbing on a roof in full camo gear to say that paedos should get the noose or something, Blackburn’s Diddyman was also recently arrested for smashing up his ex’s house in Hartlepool. Probably realising the NWI are going nowhere, he has been trying to make links with the NF (also going nowhere) so that they can at least have a bit of company on their pointless journey. 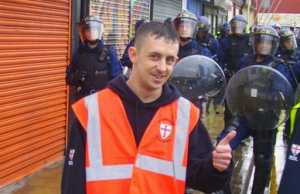 A number of those going to Skegness demonstrate their admiration of loyalist terrorist groups such as “Ulster Volunteer Force”, named after the paramilitaries who carried out bombings on civilian targets in Northern Ireland, and “Johnny Adair” named after the Ulster Defence Association commander also responsible for massacres of civilians. “Johnny Adair” is also a member of Liverpool Irish Fascists. 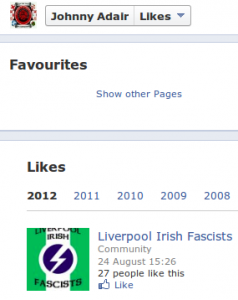 A number of other openly fascist skinheads have also notified their attendance including Leicester fan of Nazi band, Section 88, Sean Guilford and Ade Brooks, a Manchester NF bonehead and admirer of Hitler-worshipping paramilitaries, the British Movement, and white power gig organisers, Blood & Honour. 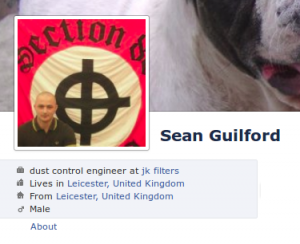 As you can see, this bunch are very keen on protecting animals and aren’t racist. Honest.

In good news on Skegness, Bristol Animal Rights have published this excellent statement clearly rejecting the far right’s attempts to use animal rights as a cover for xenophobia and racism:

The focus on halal slaughter is a sign of racial and cultural discrimination. When the U.K homes battery farms and companies like the East Anglian Pig Company (exposed by Animal Equality early in 2012) it cannot be argued that halal is “more cruel” than other practices in the UK. Instead, it gives fire to sentiments spread by far-right organisations such as the British National Party, National Front, English Defence League and others, who disguise racial hatred as patriotism, or in this case, animal rights. They have no interest in genuine animal liberation, only pushing their own political agenda.

We believe that groups struggling for animal liberation should have militant anti-fascism as an intrinsic part of their politics, and wherever and whenever fascism appears it should be met with strong opposition.

There has also been the announcement of a counter-demonstration against the NF’s planned demo.