It looks like they’re going to get their march this time but an alcohol ban is being imposed which will dampen their spirits.

Meanwhile, the “50 strong” crew of Leicester Casuals who were supposed to be turning up to a UAF meeting in Highfields to “make our voices heard” seemed to get lost on the way. References to the plans were quickly deleted from Facebook in an attempt to save face. Oh dear.

The PR campaign isn’t going very well for the EDL either. The Leicester Mercury wrote an editorial saying they should call off their march and spokesman, Jeff ‘Stabber’ Marsh got ripped apart in a phone in by the local BBC team as well. Marsh had a paranoid rant about the CPS being a left wing organisation and said that the Ministry of Justice is “biased against white people in favour of immigrants” leaving listeners in no doubt that he has lost grip on reality. Stephen Yaxley-Lennon was not available for interview, presumably having a cosy chat at a police station somewhere about the demo plans. 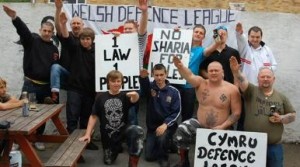 Marsh is an interesting choice of spokesman given his violent, racist past and his involvement in the openly Nazi Welsh Defence League. He has made threats against journalists in the past suggesting he is not a particularly smooth operator. The EDL’s choice to make him spokesman is more evidence that they are scraping the barrel.