Racist attacks in Lincoln and Bingham

Earlier this month, a gang of drunken racists who attacked a student in Lincoln were found guilty of racially aggravated assault and harassment and jailed. The group shouted racist abuse at University of Lincoln student, Nadir Ali, before punching and kicking him. An Irish shopper who tried to intervene also received racist abuse.

Meanwhile, last Friday in Bingham a Muslim family had a cross wrapped in ham and set on fire left on their doorstep in a clearly religiously-motivated act of harassment. This is exactly the kid of spiteful childish act that the local EDL specialise in. After all, it’s not long ago that Nottingham EDL activists Chris Payne, Nicky Long, Wayne Havercroft and Robert Parnham left a pig’s head on a stick at the site of a mosque in Nottingham. 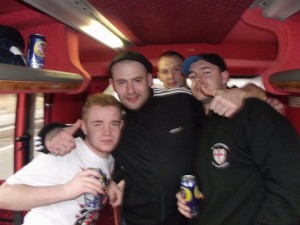 Anti-Muslim attacks are an increasingly prevalent “hate crime” and it is groups like the EDL and BNP who are inciting them and their supporters who are carrying them out.