The EDL claim that they had 160 people at their march in Nottingham on Saturday but photos of the rally only show around 100. They have haemhorrhaged support since their last march in the city in 2009. This is largely because most supporters have realised that the organisation is going nowhere and that piss ups and marches don’t achieve anything except hostility from the locals.

EDL supporters took to EDL pages to moan about the poor turnout and the “non organised whole thing”. Nottingham EDL agreed – “the numbers have dwindled down” they said admitting that “whatever else happens on the day is out of our hands”. They have lost control of their only tactic. 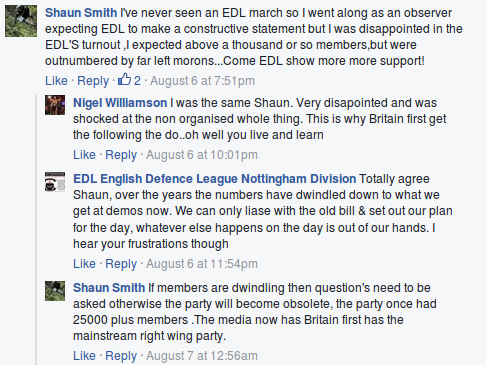 Another major turnoff for potential EDL supporters has been the constant infighting and jockeying for power (and cash) by all of the self-appointed leaders. The EDL “star speaker”, Pete Gillett, was the target of playground-style attacks from Daniel Hall AKA Jamie Upton, the all-talk-no-action leader of the Casual Infidels. Which is strange, seeing as he invited him to speak at the Casual Infidels demo in Nottingham only a month ago. Apparently Gillett is a “Kray-rent boy”, a “melt” and a “boring cunt”. This followed a major tiff between Gillett and other far right nobodies in the run up to the demo. 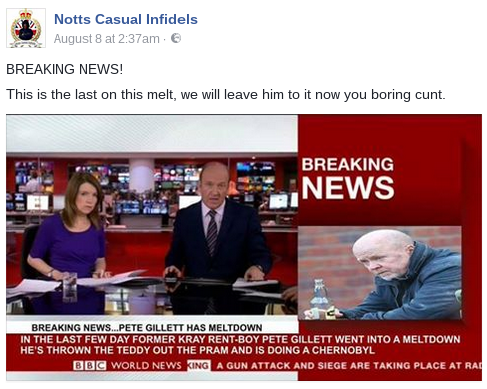 You might remember that after the NCI demo Gillett was accused of only being in it for the money and responded saying “I’m not doing demo’s [sic] I do not want to rub shoulders with cunts like them”. However, ever the attention-seeking self-publicist, Gillett changed his mind to get back on the grubby EDL podium.

After three blocked marches in a row for local fascists, it was clear that Notts police were going to push this one through by any means necessary and they drafted in coppers from over 20 forces to make sure the EDL got their march. Heavily outnumbered by over 400 antifascists the far right would never have had their way without their police minders.

As if the march wasn’t disappointing enough for the fash, Nottingham EDL organiser, Jack Stevens, (or should that be Jack Stevens, 26, of Oxford Street, Long Eaton) was arrested for throwing a flare and has been charged with criminal damage. He will appear in Nottingham Mags at the start of next month.

Craig Elliott AKA Craig Leicester, Leicester EDL organiser, threatened that the EDL would be back without police liaison next time. We’re not holding our breath.