Following in the footsteps of the National Front and the BNP, the EDL went to Skegness to demonstrate against the halal slaughterhouse on Saturday. About 40 members of the far right group turned up carrying English and British flags and pictures of cows on sticks. They’re obviously not that clued up on how halal slaughter works. 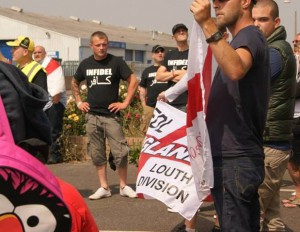 Louth EDL and a muppet: Which is which?

According to their spokesman, the demonstration was not about race or religion, just about cruelty. Someone should’ve told the people who turned up with an English flag emblazoned with “No more mosques”. Someone should probably have reminded them that the English Defence League is not an animal welfare organisation! We have never seen these people oppose veal, foie gras or fur. The EDL claims to be concerned with what it paranoidly calls “creeping Sharia”, something which is all about religion (and many would say is a coded reference to race as well). The organisation’s mission statement says that “No one should be made to consume halal produce unwittingly”, suggesting that halal food should always be labelled and that people should have a choice whether to eat it or not. In reality, the EDL’s actions suggest that they are opposed to halal and the freedom of choice to consume it or not. 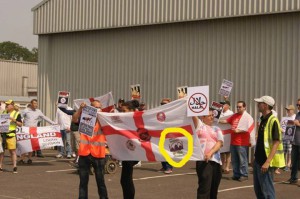 Flag with No More Mosques logo and slogan

Perhaps even more so than the openly racist National Front and BNP, the EDL are hypocritical when they oppose halal slaughter without saying anything about kosher slaughter. The EDL spokesman in Skegness complained about pre-stunning. In fact, figures produced for the Food Standards Agency in 2011 showed that that 84% of cattle, 81% of sheep and 88% of chickens slaughtered in the UK for halal meat were stunned prior to their deaths. Kosher slaughter prohibits pre-stunning, so by the EDL’s own criterion, kosher is worse. But the EDL has a long history of pandering to Jewish islamophobes such as Roberta Moore, former head of the Jewish Defence League, and Rabbi Nachum Shifren, and the organisation has held a solidarity demonstration with Israel. The EDL leadership don’t want to upset the small number of Jewish islamophobes it has brought into the fold. The organisation knows that it can make more political capital out of hatred against Muslims.