Just a few days after Lincolnshire’s newly elected UKIP councillors refused to sign an anti-racism declaration, Linconshire Police have confirmed that they are investigating three of the councillors over racist posts made on their social media accounts. One of those to be investigated is the leader of UKIP in the county, Councillor Chris Pain, who has made appearances at BNP and EDL supporter, Dean Everitt’s anti-immigration demos.

Have you noticed that if you ­rearrange the letters in ‘illegal ­immigrants’, and add just a few more letters, it spells, ‘Go home you free-loading, benefit-grabbing, resource-sucking, baby-making, non-English-speaking ********* and take those other hairy-faced, sandal-wearing, bomb-making, camel-riding, goat-********, raghead ******** with you.

Pain used the time-honoured ‘my account was hacked guv’ defence and hilariously added ““When you’ve got friends that are coloured it makes it even worse.” Perhaps you should ask those friends whether they like being referred to as “coloured” Chris! The rather dubious account hacking explanation was rubbished by the journalist investigating Pain who said that he has a “prolific habit of xenophobic, racist and far-right posting”. 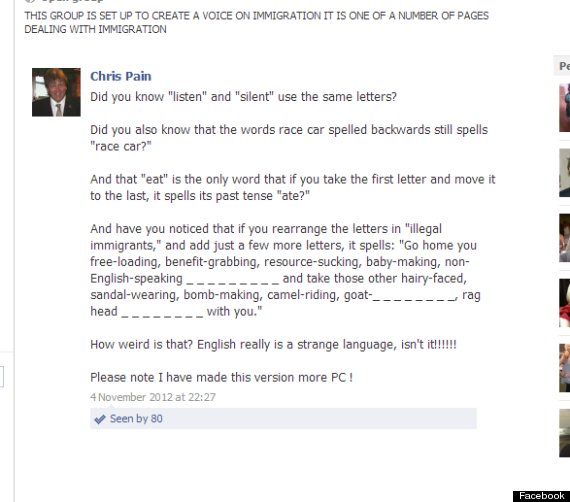 Also under investigation is Alan Jesson, councillor for Spalding South who posted racist and homophobic remarks on his page, threatening forced repatriation for all migrants. Jesson told a Polish woman to “fuck off” and another man that his “culture is not welcome in the UK”. Tiggs Keywood-Wainwright, the third councillor, posting about migrants said “Put them in a box so they can’t fight back and ship them off as cargo” and “From what I know of Turks, they are not to be trusted.” In her defence, Keywood-Wainwright said “The comments I made were from months ago.”

It’s really no surprise that a party that has welcomed former BNP members into the fold and has such a xenophobic and race-baiting image contains racist and homophobic bigots. It should tell you about what kind of people that UKIP seeks to attract when some of these racists are then elevated to leadership positions within the party. I doubt this will be the last we hear of people with far right sympathies and sentiments campaigning under the UKIP banner.
« The racists behind Lincoln demo
Possible EDL demo in Nottingham tomorrow »