Pig’s head man gets off

Liam Ferrar, the man who put a pig’s head at the door of a community centre used by a Muslim group, has escaped jail. Ferrar, a prominent member of the EDL-led Forgotten Estates group was given a suspended 12 week jail sentence and ordered to do 250 hours community service and pay costs. Ferrar pleaded guilty to religiously-motivated harassment in January.

Whilst much was made in court about Ferrar’s remorse and how he’ll never do it again, the act was clearly premeditated. He obtained the head many months before the act and kept it in his freezer.

That said, it’s a good thing that Ferrar wasn’t jailed. Leicester EDL would have loved to have had a martyr for their cause and would have been banging on to anyone who’d listen about their fabled “two-tier justice system” and how the CPS are all communists. Importantly, As Salaam’s imam made a statement to the effect that they were satisfied that justice had been done and it is good that no one had to go through the dehumanising experience of prison.

The EDL, however, are baying for blood about another incident: 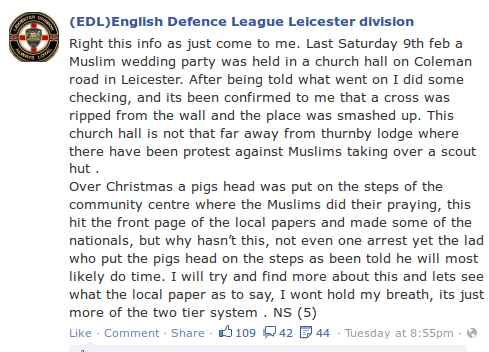 At first glance this looks like another made up story, like the one about a cross being covered up by Muslims from August. However, this one seems to have an element of truth to it: 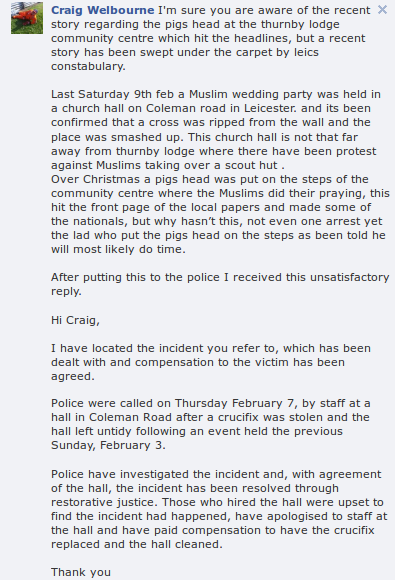 It seems as though the incident was a) nothing to do with the people who hired the hall and b) resolved to the satisfaction of the injured party. All done and dusted by the looks of it. It’s also hardly comparable to the pig’s head incident which was clearly a premeditated attempt to intimidate the Muslim community, given the particular significance of the pig to Muslims and the context of ongoing protests in which Muslims claimed to have been abused and intimidated. There is no evidence of premeditation or intimidation in this church hall incident and you can bet the EDL would be shouting it from the rooftops if they’d found some.

This is just another bit of hypocrisy from the EDL, who always moan about the police force, filling their profiles with ‘1312’/’ACAB’ (All Coppers Are Bastards) posts when ‘their’ people are being arrested and repressed by the police. However, it seems they are quite happy to see arrests and punishment of people they don’t like.

It’s also very strange that they are complaining about the media giving coverage to the Ferrar case but not this rowdy party gone wrong. After all, the Ferrar case only got the amount of coverage it did because of the hysteria the EDL and friends had whipped up around the Thurnby Lodge scout hut and the nightly protests that they instigated. That’s why it was front page news rather than a small crime report buried on page 10. Their own exclusive scoop isn’t really much of a story unless you’re a paranoid anti-Muslim bigot who sees Islamic domination on every street corner.

« Nottingham BNP are desperate
Fascists leak their own details »