The BNP have been roundly criticised by locals involved in protests in Thurnby Lodge. Maxine Williams, manager of the Stirrup Cup pub, said outside groups such as the BNP and Nick Griffin were not welcome. In an extensive comment on the ThisIsLeiecstershire site, FORGOTTENEST said “It has absolutely nothing to do with Muslims!” and that

Neither EDL or BNP were invited to attend any of the peaceful protests staged by the local residents. They turned up of their own accord with their own agenda. This is not the agenda of the local community.

Another poster commented that “I would be the last person to vote the bnp in to power, our country is in enough trouble as it is thank you.”

Meanwhile, in a crass attempt to get more political mileage out of the situation, the EDL have been spreading a very obviously false story about a church cross in the area having to be covered up so that Muslims were not offended. Although they claimed to have “solid eye witness reports” they called out for anyone with “real legitimate news” to let them know. Well here goes: Canon David Monteith, Acting Archdeacon of Leicester, said: “There is no truth at all in the malicious rumour that the church was asked to cover the cross. The information is totally unfounded.” 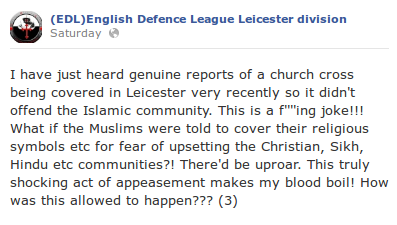 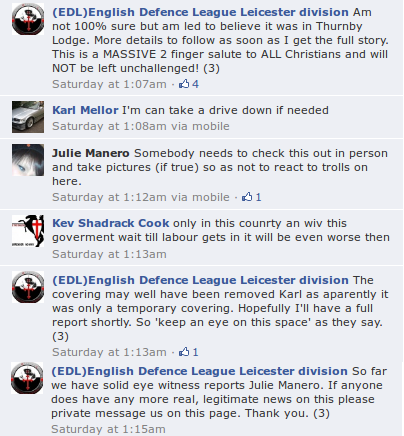