Matt “NFSE” Hickman, a member of the EDL from Boston, has been arrested for a suspected racially-aggravated offence, in what may be the start of a round up of the far right. According to Hickman, police arrested him under S.4 of the Public Order Act (Fear or provocation of violence), in relation to posts made on his Facebook page. He said the police have told him more arrests will be made.ide 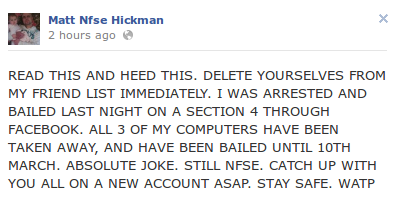 Whilst it is sickening that the state can simply round people up based on posts made on Facebook, we won’t be shedding any tears for Muslim-haters like Hickman. There is no doubt that a great deal of fascist organisation to attack people based on their skin colour or religion occurs on Facebook and this organisation should be disrupted as much as possible. 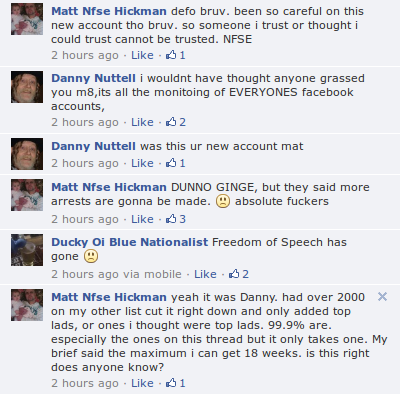 But which of Hickman’s “top lads” is the grass? And who will be called down to the station next?

This entry was posted on Friday, February 8th, 2013 at 16:31 and is filed under . You can follow any responses to this entry through the RSS 2.0 feed.

One Response to “Boston EDL member arrested for racial abuse”