Derbyshire based far right kingpin, Tony Curtis, never ceases to give us a good laugh. When he’s not in his bedroom playing computer games or collecting ghost stories (usually about “the muslamic menace”), Curtis assures his handful of loyal worshippers that he’s working behind the scenes on a top secret plan to “unite the right”. Any day now, he keeps saying, he will achieve unity of the tribes and crush the evil multicultural empire.

Seeing as it was precisely these kind of shady deals that got him kicked out of the EDL in the first place, we’re a wee bit sceptical about whether Tiny Tone can really pull it off. But if he did, who would be the key players?

The English Volunteer Force seems to be the destination of choice for those leaving the EDL in droves at the moment, although their first outing in London drew less than 10. They’ve got a demo about something in Birmingham at the weekend and Tony will be guest of honour, so they are obviously close to his heart.

The EVF is run by Chris Renton AKA”John Sheridan”, a former member of the EDL leadership and former BNP activist from Weston-Super-Mare. Renton tried to make links between the EDL and neo-Nazi bootboys, Combat 18 and was an enforcer on the EDL’s web pages. Former EDL leader Paul Ray described how a 57-year old grandmother emailed the EDL leadership offering support and was “met with a barrage of hate mail including messages from the Sheridan alias himself, many of which had a crude sexual twist to them”. EVF “number 2” and organiser on the ground is Will Anderson AKA “Jason Lock”, also from Weston-Super-Mare. He has made a name for himself by posing with a pair of pants on his head on the internet.

It is slightly surprising that Curtis is so keen on the EVF because he refused to work with Bill Baker’s New Patriot Alliance because they were “racist”. The EVF are as racist as any other far right group. To give two examples, a recent Merseyside EVF post compared black people to monkeys and Andy “EVF” Robinson, organiser of the Birmingham demo, has suggested that the EVF go smash some “browns”. The EVF has invited the openly racist West Midlands Infidels to their Birmingham demo. It would seem that, like most far right leaders, Curtis is an opportunist who will never hesitate to sell out in order to get more power for himself and his pet projects. 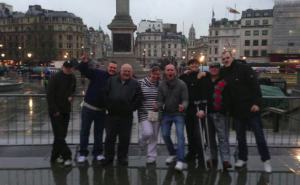 EVF in London: Nothing to write home about

The New Patriot Alliance in basically just Bill Baker. Baker is another far right chancer who’s been in every group going and been kicked out of them all as well. He has been in the BNP and the English Democrats and was booted out of the EDL in 2011 because of his links to Combat 18 and Redwatch. Because no one else wants the loser, he has had to set up his own group, the English Nationalist Alliance, whose latest incarnation is the NPA. 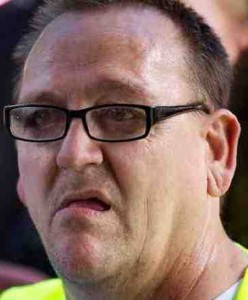 Bill Baker: No one wants him

Baker has said “Sooner we start killing Muslims the Better and their socialist pals” and has claimed he “used to kill for a living”, threatening that Muslims “can all be buried in your black flags when we finish with you”. As usual with these fascist muppets, Bill is all talk and no trousers. His biggest “achievement” in recent years has been taking his tiny band of keyboard warriors on an annual trip to Brighton to get battered by the locals.

Led by the ultimate keyboard warrior, Jeff Marsh, Casuals United are another group who like to talk a good game but never seem to actually turn up on the day. Their slogan, “We go where we want”, usually seems to involve a pub on the other side of town or just staying at home. They have a habit of being so undercover that we have a sneaky feeling that they don’t even exist. The latest example of this was their notable failure to turn up to “smash the reds” or whatever it is they pretend they’re going to do at a protest against Greek neo-Nazis, Golden Dawn. Once they’d had time to cook up a story, they claimed there’d been 500 of them in a pub in Paddington. Yeah right Jeff. 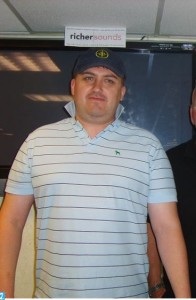 “Marshole” divides his time between producing badly photoshopped pictures of Weyman Bennett, making up lunatic conspiracy theories about how the Crown Prosecution Service is a “commie”, anti-white organisation and flogging ghost-written books about his made-up hard man past to gullible supporters.

Most of the right wing football casuals who supported the EDL in their heyday have moved on with their lives. Sadly Jeff hasn’t.

Probably the least likely bedfellows with Curtis, because of their open links with the National Front and other explicitly fascist groups, the Infidels are led by crack head and llama abuser, John “Snowy” Shaw. Snowy is none too bright, as shown by his recent outing of himself as organiser of a loyalist demo in Manchester and his belief that the anti-Semitic forgery, The Protocols of the Elders of Zion, is true. The Infidels’ second in command is Shane Overton AKA “Diddyman” who was recently up on domestic abuse charges against his pregnant girlfriend. 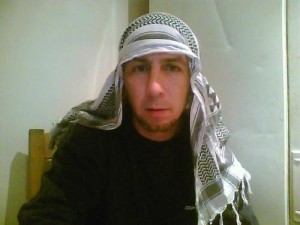 Unsurprisingly, with losers like these in charge, the Infidels’ demos have been a string of disappointments. Most recently they had a very public falling out over the fact that only a tiny handful of them bothered to turn up to protest a proposed mosque in London. This was another attempt to “unite the right” that backfired. The possibilities aren’t looking good.

The possibility of gathering this bunch of bitching, narcissistic losers together in one organisation looks slim. They’ve all got past grudges with each other and their leaders all want to be Führer. Tony Curtis seems to be the latest in a string of far right figures who think that they can “unite the right” but it is just a fantasy.

Even if he succeeds, these groups combined are pitiful compared to the holy grail that all of these fascist failures chase after – the EDL at their peak. Tommy and Kev have squandered their support and sold their followers down the river and most of the footsoldiers have moved on with their lives. Only the most pathetic and incompetent are left.