Derbyshire BNP organiser Paul “Blackshirt” Hilliard has set up a Facebook group rather pompously named “Nationalists must unite as one to achieve victory” in an attempt to unify fascism’s warring tribes. “This page is NOT A PLATFORM FOR ATTACKING OTHER NATIONALISTS” it warns but “what matters”, rather ominously, is “that we could all join forces on the streets when the time comes.”

It doesn’t seem that many people are listening to Paul’s pleas for unity and most are using the group as an opportunity to air their grievances about other fascists’ failings and argue for their own highly specific brand of far right politics. Many posts moan about needing a “lull between arguing” and how “virtually every comment follows by an argument” and Hilliard himself has started deleting members who are “attacking our nationalist leaders”. Pointing out the obvious he whinged about how “You cannot unite whilst attacking one another” and, hilariously, “swearing at one another shows a lack of interlect and does not look good at all.”

It probably doesn’t help that the most outspoken members of the group are outright nazis such as John Hickling: “National socialist me and not ashamed to admit it”, Jason Withey: “do as i do declare yourself a nazi and be done with it” and steroid freak and ZOG enthusiast, Nick Thorrington: “if we ignore the Jewish threat we are destroyed forever. 14w”. Another frequent poster is Daz Marxisthunter, an admirer of Anders Breivik whose profile is a photoshopped picture of the mass murderer giving a Nazi salute. 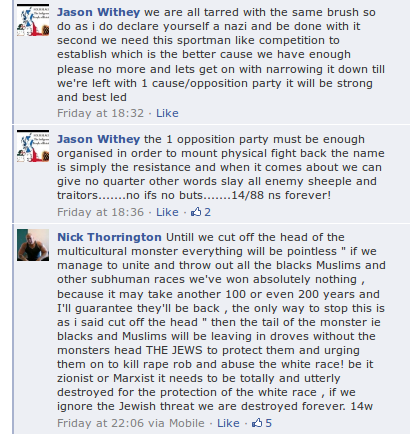 Along with all of the infighting there are frequent admissions of defeat such as this from Fess Traynor:

i hate the way the far left have basically downed tools, they dont need to oppose us anymore .. the varios splinter groups of nationalism (to which we seem to have hundreds of) all bicker and call each other names and while we all infight… were slowly losing our once beloved country

half the BNP dont like the other half the EDL are split between north and south it just goes on and on and on…. the ED splitting up when butler joined it 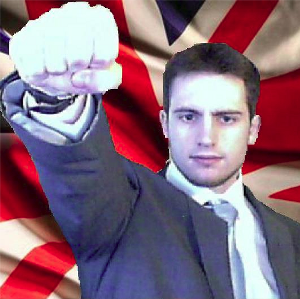 Daz MarxistHunter: This is what nationalist unity looks like

It’s quite ironic that Hilliard is the person trying to initiate fascist unity seeing as he himself has taken sides in the split in Derbyshire BNP between supporters of Lewis Allsebrook and Cliff Roper, which has left a lingering bitterness. It’s always the trouble in fascist politics – everyone wants to be the Führer. His party leader isn’t helping – Nick Griffin has restoked hostility with the EDL in the past week by releasing a YouTube video, aimed at EDL footsoldiers, in which he rants about the Zionist sympathies of the EDL leadership, how Tommy Robinson is a shape-shifting lizard, etc.

Hilliard has said that “Once [the group hits] 5000 members we will be looking to hold a private nationalist party… to set in stone our unification.” We won’t be holding our breaths!