Amber Valley BNP is the slapstick comedy that keeps on giving. The latest news is that chirpy chipmunk and Heanor councillor Lewis Allsebrook has thrown his toys out of the pram and left the party. He’s taken the rather rubbish Amber Valley Matters website with him and seems hell bent on destroying the rats that are left on the BNP’s sinking ship. Allsebrook’s rambling resignation message lets rip on his enemies within Derbyshire BNP and admits that he has been behind all of the truthseeker22 ranting.

Before he steps off the stage never to be heard of again, we’d like to thank Allsebrook for all the laughs he’s given us over the years: from starting rumours that he was having a tawdry affair with Emma Roper, to admitting that whilst he’s “always been strongly opinionated I’ve sometimes found it difficult to articulate my views orally… I still to some extent let my words come out in the wrong order”. Not to mention the recent hilarious rants of truthseeker. The information he has provided us has been invaluable. 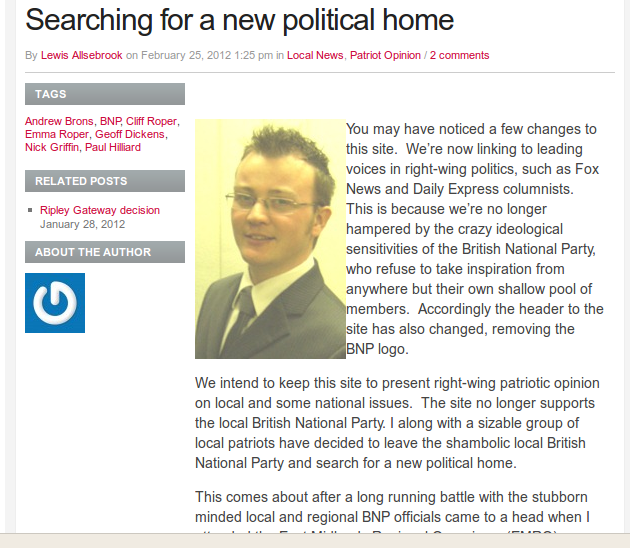 Now, on to that resignation rant which digs more interesting dirt on the already very grubby local BNPers. Allsebrook describes having been “hampered by the crazy ideological sensitivities of the British National Party” which is “shambolic” and only has a “shallow pool of members”. Allsebrook claims to have left with a “sizeable group of local patriots” although we suspect this amounts to Allsebrook and his tiny clique: Debra Purdy, Amy Purdy and Maria Riley-Ward.

Apparently all of the simmering resentments came to a head at a recent regional organisers meeting at which Allsebrook was given short shrift by East Midlands organiser Geoff ‘the Marxists are everywhere’ Dickens who told Allsebrook to leave before he’d even sat down. “I swore in the words that followed,” Allsebrook recounts “and went a bit incoherent, it wouldn’t make good reading.” Bless him! “Geoff’s short, abrupt, stubborn manor proves nothing will change in the BNP,” he concludes “and if your views are extreme enough you’ll get away with murder.” We’re hoping for some actual backstabbings within the party any day now!

This is a reference to Cliff Roper who has “spouted a Socialist far left extremist version of nationalism (national socialism?)”. Far be it from us to point out that the BNP has always been an extremist party inspired by national socialism. Roper has “publicised our local suppliers, exposed local members who wrote under pseudonyms on websites in a tactic not dissimilar to those who leaked the membership list, and fuelled the opposition with ammunition to fire at the BNP”. He certainly has and we thank Cliff and his followers for that. What better way to respond in a way that won’t further damage ‘local patriots’ than by airing your dirty laundry in public. Well done Lewis!

Cliff’s wife, Emma Roper, also comes under fire for doing a shit job of organisation (Allsebrook says she is “inept” and has poor literacy skills). Allsebrook sought to replace with one of his faction, Debra Purdy. Emma “was livid about this and rang round members telling them to boycott the group fundraising meetings.” Realising that regional organisers Paul ‘blackshirts’ Hilliard and Dickens “were going have [Cliff Roper] foisted upon Amber Valley at the next election” Allsebrook and Purdy decided to cancel the group’s Christmas fundraiser in an attempt to blackmail the local party, with predictable consequences. Roper stepped up the attacks against Allsebrook on his blog and Allsebrook was ostracised even further. Purdy herself has recently resigned as well. 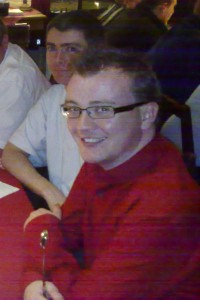 Allsebrook claims that he gave up leadership of the local party to Roper in an attempt to bow out quietly. Allsebrook’s verdict is that “[s]ince taking on the group Leader position, Cliff has not imparted his opinion on council agenda items at all, showing no leadership.” Finally, this year, he said “okay then ‘no holds barred,’ and Truthseeker22 started giving Cliff and his small band of wreckers a taste of their own medicine.” He admits that truthseeker22 has been orchestrated from within his own small camp of supporters.

Roper, you may remember, hasn’t been very happy with Allsebrook either, complaining that he had not dealt with queries from this constituents or attended meetings within the community. It seems that neither of the fascists are particularly good at representing their constituents as they’re too busy calling each other nasty names. Naughty boys! It seems they both fell victim to the fascist tendency for everyone to want to be Gruppenfuhrer.

Allsebrook will be particularly upset about having to leave the local party as he was their single biggest donor in last year’s elections, giving over £1,300. This was a source of further suspicions of blackmail and Roper made barbed comments about what the “generous donation” might buy him. Roper then did his own spot of blackmailing by resigning the party whip for a grand total of 6 days before being appeased with leadership of the local party, instead of Allsebrook.

All of this has been driven by the feuds between current dictator and chronic swindler, Nick Griffin, and  a long line of non-entity challengers. Members are either desperate to replace the disastrous liability that is Griffin, or desperate to curry influence with the boss, and sparks have flown between the camps whilst members have left in droves. Roper has also bemoaned how they have lost so many activists that they are having to get together with the Nottinghamshire party, who are in even worse straits, for days out.

Allsebrook’s post has attracted a few comments, one from ‘bikerman1100‘ who chastises him for making “some pretty inflammatory statements” and says that Roper was “legitimate” to name and shame Allsebrook on his blog. In a rare glimpse of sanity he suggests that “Maybe some of these things should only be discussed behind closed doors for the sake of the party.” He also bemoans “The lack of members at meetings” and the “dwindling membership” of a party that is rapidly going down the shitter.

Also there to comment is Michael Clarke, a former BNP candidate who has since fallen by the wayside. He backs Allsebrook saying that the Heanor councillor has “been badly let down by both Derbyshire and Regional Organisers” and is scathing about Cliff Roper’s “intransigence” suggesting that other members might be “unaware of how useless a councillor he has been”.

All in all, another deeply satisfying dagger driven into the shrivelled heart of Amber Valley BNP. Good stuff!

This entry was posted on Wednesday, February 29th, 2012 at 17:13 and is filed under . You can follow any responses to this entry through the RSS 2.0 feed.