What’s left of Leicestershire BNP had a meeting the other day to rally their geriatric fans for a round of tea and biscuits at the village hall. Along with the usual agenda items – rubbish excuses for the party’s fraudulent activity, unjustified optimism about electoral chances – was some rather amusingly paranoid tosh from East Midlands organiser, Geoff Dickens:

[A]lthough the People have never voted in any great numbers for Marxism, yet it exists almost everywhere; it’s ideology had infiltrated the British way of life and it’s influences were now apparent in almost every sphere, especially the media, the Church, multiculturalism, a biased legal system, education, and finance.

Now let’s just forget for a minute the usual far-right nonsense about cultural Marxists eating our children’s brains in the schoolyard and the communists of the CPS, and focus on that last item. Dickens for some reason seems to think that the world of finance is under the secret influence of Marx. We can only assume he means Groucho Marx, the satirist of the ruling classes, rather than Karl Marx, the revolutionary socialist. After all, Groucho did once say that “Money frees you from doing things you dislike. Since I dislike doing nearly everything, money is handy.” 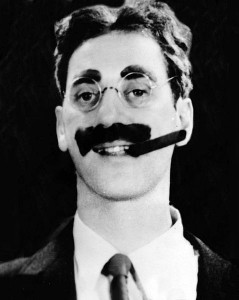 But seriously, suggesting that bankers and stockbrokers are beholden to the hidden hand of those who support worker’s struggle for the creation of a classless society is so delusional that it does make us wonder what the fascist pensioners are drinking in their tea.