The EDL are being very quiet about their latest failure this morning. Yesterday a pitiful 600 of their foot soldiers turned up for their latest “big one”, a demonstration that never had a chance of getting to Tower Hamlets. “Top boy” Tiny Tommy was arrested (to be debriefed by his handlers no doubt) at the end of the demo and several of the cannon fodder were nicked for carrying offensive weapons and fighting the police. Over a thousand people attended an anti-fascist rally at Altab Ali park and several hundred marched off in defiance of police restrictions. A group of over 100 actually made it to the EDL’s route before being kettled. Despite all of their macho bravado, the EDL were easily contained by the police but anti-fascists were much more effective. 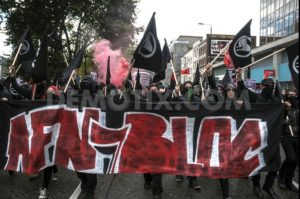 The EDL is obsessed with the London borough, home to the East London Mosque and a large Muslim population. The last time they tried to go to Tower Hamlets, in 2011, they had 1,500 marchers on their side. Locals and anti-fascists made sure that they did not pass. This time the police drafted in a massive 3,000 officers to make sure that everything was locked down and resorted to the extremist tactic of arresting all 240 anti-fascists who were kettled near Tower Bridge and on Commercial Road. The charge? Disobeying the police!

Meanwhile, some fascist Leicester Casuals were also getting nicked. They’d decided to venture into the belly of the beast, the “no go area for whites” they’re always fantasising about and trying to control their terror as they passed the East London Mosque. Apparently, all the Muslim youth did was “chomped at us in some far away bongo bongo language” which they reckoned was a massive show of cowardice. Clearly disappointed that no one gave a fuck about them they were relieved to be bundled to safety by the police.

It was also a bad day for Craig Elliot, leader of the Leicester EDL who provides the sound system for EDL demos. He was arrested and held till midnight although he was cautious about saying what for. That will be one to look out for in the coming months.

In summary then, it was a very bad day for the EDL. The “Rigby bounce” has already been squandered, probably because more ordinary people who were duped into coming to their events have worked out what a bunch of racist losers they are and moved on. The turnout was very poor for a much-hyped national demo. They failed to go to Tower Hamlets for a second time. A much bigger and better organised anti-fascist movement turned out to oppose them and did a better job of challenging the police lockdown. The leadership were put under more police pressure with strategic arrests and late night chats in the cells. The EDL ship has no direction and is floundering.

This entry was posted on Sunday, September 8th, 2013 at 16:42 and is filed under . You can follow any responses to this entry through the RSS 2.0 feed.