The bad news keeps coming for the BNP who have seen their vote collapse across the East Midlands, even in previously strong areas such as Charnwood and Amber Valley. The results are now in from Derbyshire, Leicestershire and Nottinghamshire and they’re not good for the BNP. 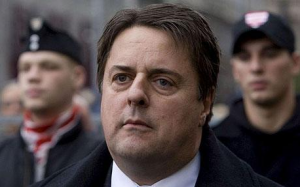 The Fuhrer gets the news

In Amber Valley, the Invisible Councillor’s stay in the wilderness looks set to continue. Cliff Roper blogged excitedly about UKIP not standing in his Greater Heanor ward a month ago but it didn’t help him out. He managed to get 336 votes (12.5%) but that was nowhere near winning. Adrian Hickman failed in Heanor Central only managing 5.5% in a ward that the BNP got 12.5% in in 2009. In Ripley the party’s results were even worse with Alan Edwards getting a pathetic 2.6% in Ripley East & Codnor and Ken Cooper only scraping 63 votes (1.5%) in Ripley West & Heage. There have been some boundary changes in the area but the BNP got 7.2% in Ripley and 6.3% in Heage last time around so this is a significant drop in their share of the vote.

The BNP were  standing 6 candidates in Charnwood and 1 in the nearby ward of Glenfields, an area of north Leicestershire they have previously done well in. It was not to be this time around though. Peter Cheeseman’s share of the vote in Glenfields slumped from 16% in 2009 to 3% and the party’s share of the vote was halved across Charnwood. The best results came from Cathy Duffy in Syston Fosse (11.4% compared with 25.6% in 2009) and Robin Derrick in Thurmaston (10.5% compared to 19.6% in 2009) although in both wards their share of the vote had dropped dramatically.

Things weren’t looking much better for the newly formed (and probably soon to demise) British Democrats either. Kevan Stafford, a former BNP candidate got 7.4% of the vote in Loughborough South (the BNP did better with 12.4% in 2009) and we are very happy to announce that nasty islamophobe and former BNP councillor Graham Partner lost his seat thanks to a massive desertion by his voters. Partner won the Coalville ward with 27.7% of the vote in 2009 but only managed to get 7.4%, less than a third of his previous share, this time. Good riddance!

In Nottinghamshire the re-emergence of Broxtowe BNP seems to have been dealt a fatal hammer blow. Broxtowe organiser David Wright only got 78 votes (2.6%) in Beauvale and fellow activist Alex McConnell did even worse in Eastwood, only managing to attract 57 votes (2.1%). The BNP got 19.7% in Beauvale in 2009 so this is shockingly bad.

With only Northamptonshire left to declare, the news is grim for the far right who have seen voters desert them. No doubt this is in part due to a surge in popularity of the slightly more moderate UKIP but also undoubtedly because the BNP has failed to offer anything to voters in times of austerity except a racism that is increasingly out of touch with the public. Infighting in the far right has meant that many of the party’s activists have given up in despair or left for other pointless groups, leaving the BNP unable to contest elections effectively. We will doubtless see many more desert following these appalling election results and hopefully the knives will be out for Griffin again.