The Church of England voted this week to ban clergy from joining racist or discrimatory organisations.  This ban, targetted mostly at the BNP, has predictably been condemned by the fascist party, whose persecution complex has been further reinforced.  The BNP would dearly like to believe that God is on their side; in common with most strains of European (and US) fascism, identification with some variety of Christian belief is very important to them, especially as a perceived counterpoint to Islam.

Although the UK’s established church may have pushed the BNP away, the party have their  own pretend church to comfort them – the “Christian Council of Britain”.  This BNP front group, named as a conscious counterpoint to the Muslim Council of Britain, is headed by the “Reverend” Robert West. 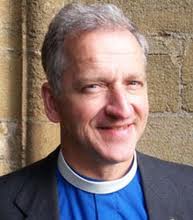 West, from Holbeach in Lincolnshire, is an interesting character. He has not been ordained into any recognised church, and has been unable to explain how he earns the title “Reverend”.  Presumably it helps him get a better deal on his car insurance?  West was expelled by Lincolnshire Tories for addressing the BNP and agreeing to front the Christian Council of Britain in 2006, and ever since has played the strange role of the “BNP’s vicar”, saying grace at party events, blessing the pudding at fundraising dinners, and popping up at events all over the East Midlands.

His mission with the Christian Council appears to be aiming to establish a god-given racism, as the organisation’s constitution blathers about “the godly importance of race and nation” and the establishment of “national homelands – by the will of God”, and similar racist wet-dreams.  It’s no surprise to find that the Council also expresses very “traditional” views on issues such as homosexuality and the role of women.  Religion and fascism have often shared socially conservative agendas, and the Council is the BNP’s laughable attempt to make a link between god and Griffin.

Unfortunately for Robert and his tiny pseudo-church, his views are rejected even by the mainstream church in the UK, let alone with the overwhelmingly secular population at large.  The BNP’s desperate attempt to co-opt religion for their own ends isn’t doing so well; Robert’s racist prayers don’t seem likely to be answered anytime soon.