The recent conviction of a grooming gang of nine Muslim men from Rochdale has put the far right into a frenzy. Anti-fascists might remember that the far right have been all over this case since the start of the trial. The EDL, BNP, National Front, Infidels and British Peoples Party all turned up to protest at the start of the trial, attempted to attack the defendants and almost caused a mistrial by attacking the defence barristers. There then followed attempts to stir up race riots in Heywood, when shops and businesses belonging to Muslims were attacked by a mob of white youths, something that was whipped up online by nationalists desperate for a populist cause (for example, posters on Nazi site, Stormfront, who could barely suppress their excitement about the “Race riot in Heywood!!! On now!”). None of the businesses targeted were actually owned by the men involved in the trial.

It is not surprising that people are disgusted with the behaviour of the grooming gang, which preyed on young, vulnerable girls, many of whom were from children’s homes and had already suffered neglect and abuse. It is quite right to want to end street grooming and all other kinds of paedophilia and sexual abuse. But the far right don’t have any credible answers.

The most prominent response bouncing around the far right echo chamber is “HANG THEM!!!!”, usually accompanied by a picture of gallows with an array of nooses. This might satisfy a desire for revenge but it won’t stop sexual abuse. Countries that do execute people for sexual abuse and rape, such as Iran, Syria, Bangladesh and Saudi Arabia (hardly countries that the far right would normally wish to emulate), have not eliminated the incidence of such crimes. A comparison of states with and without the death penalty in the USA demonstrated that the murder rate is actually 48-101% lower in states that do not have the death penalty, suggesting that it has no deterrent effect. As Amnesty International point out “The threat of execution at some future date is unlikely to enter the minds of those acting under the influence of drugs and/or alcohol, those who are in the grip of fear or rage, those who are panicking while committing another crime (such as a robbery), or those who suffer from mental illness or mental retardation and do not fully understand the gravity of their crime.” I would add to that list those who are motivated by lust, such as child rapists.

The other “preventative measure” suggested by those like Nottingham EDL member, Ian Firmstone, is to encourage people to keep their daughters indoors and away from British Pakistani takeaways! Apart from the massively restrictive effect this would have on their freedom (and the racial segregation it would impose), this is no solution to the problem of sexual abuse, which is normally committed by those who are known to the victim. The US-based Rape, Abuse and Incest National Network (RAINN) reports that 73% of sexual assaults are committed by a non-stranger and approximately 2/3 of rapists are known by their victim. In the more socially conservative context of Delhi, India, 98% of those accused of rape or molestation were known by their victims. RAINN state that 4 in 10 sexual assaults and rapes take place at the victim’s home and a further 2 in 10 at the home of a neighbour, friend or relative. The idea that rapists are predominantly strangers who make unpremeditated attacks on unaccompanied girls is unfounded. 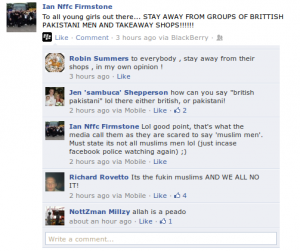 The far right are leaping all over this case because it helps to confirm their prejudices. They have long set up British Muslims, especially British Pakistanis, as the source of all evil, claiming that they are responsible for everything from heroin dealing to terrorism and now sex crimes as well. As Leicester EDL’s Matty Noble and friends say, the problem is “the muslims”, “pakis”, “curry munchin arm pit b.o. smellin shit stabbin spear chuckin white gal raping bomb blower uppers son ov a mother fuckers” because after all “When do u ever hear of white ppl rapin pakis”. When you already have horrific racist attitudes like these, any evidence you can find of Muslims actually committing crimes is seized as proof that your attitudes are justified. Their hypocrisy can be seen quite clearly in their rather less energetic response to paedophilia cases where the perpetrators are white.

The far right have cited some rather dubious sources for their racialisation of grooming. For example, a Guardian article in which Martin Narey, an ex-Barnardo’s chief executive was misleadingly titled “Grooming offences committed mostly by Asian men says ex-Barnardo’s chief”. (Narey actually specified a much more specific category: “the street grooming of teenage girls in northern towns”. Most grooming prosecutions are against white men.) However, Narey is a somewhat controversial figure to quote on this matter anyway. Before joining Barnardo’s, Narey was director general of the Prison Service when notorious paedophile and prison guard, Neville Husband, was finally prosecuted for decades of horrific sexual abuse against youths in young offenders institutes. Narey had also been the assistant governor of the two institutes in which Husband had carried out his attacks. Narey never called for a public inquiry into Husband’s case. When interviewed earlier this year, Narey was still unsure “whether a public inquiry would be justified”. It could be argued that Narey has turned a blind eye to child abuse on his own watch.

We’ve seen that the far right have very little grasp on the facts around such crimes, so what do the experts say? Mark Williams-Thomas, a former police detective and child protection expert, is quoted as saying “Attacks in isolation and grooming tend to be perpetrated by white men. Collectively, the transferring of girls among young men for sex involves Pakistani men”. Ella Cockbain & Helen Brayley, researchers at the UCL’s department of security and crime science, believe that there are “two main profiles of the on-street groomer.”

First, we have the white offenders, who typically offend alone. So far, nothing new: the lone white male is the norm for UK child sex offences. Second, however, there are Asian offenders, many of whom are of Pakistani origin. They seem much more likely to offend in groups, lending their abuse a curiously social dimension. [My emphasis]

However, they warn against pursuing racial profiling because “entrenched stereotypes have a nasty habit of persisting, even when the evidence moves on.”

Nazir Afsal, the chief crown prosecutor for the North West, said of the Rochdale gang that “It wasn’t their race which defined them, it was their treatment of women”, an opinion shared by Professor Malcolm Cowburn, a criminologist at Sheffield Hallam University. “The larger issue is of problematic masculinity and how certain men view women, children and their sexual rights”, says Cowburn, “I don’t think it lies within ethnicity but within gender”. Communities with strong male bonds and patriarchal structures often generate a culture of silence around sexual abuse, as has been seen within the priesthood, and this may account for the cultural dimension in the on-street collective grooming phenomenon.

Ironically, the far right is also a patriarchal community with strong male bonds and its own culture of silence has protected paedophiles within its ranks. The overwhelming majority of EDL and BNP members are male and rape jokes, misogynist attitudes and sexual objectification of women are common in far right circles. Numerous paedophiles and sex offenders have been identified within the far right but often the truth has been slow to surface and the perpetrators have been protected. Take the example of Richard Price, an early leader of the EDL, who was portrayed as a political prisoner by Tommy Robinson and co, despite the fact that he had been charged with possessing child pornography. Rather than face the unsavoury truth that one of their brethren was a sex offender, the EDL protected Price and tried to suppress the truth. Indeed, Price was a still an admin of the EDL’s Facebook page until January of this year.

The real reason that men sexually abuse women and girls is because they feel entitled to do so by a patriarchal culture that views them as sexual objects. Therefore, the way to tackle sexually abusive behaviour is not to “hang the nonces” or “lock up your daughters”, something which promotes the patriarchal idea of women as weak and defenceless, but to challenge the patriarchal culture which promotes rape and the objectification of women and girls. The far right’s misogynistic culture which only views women as progenitors of the white race, a class of kitchen and bedroom slaves who are incapable of fighting for themselves, is extremely damaging to women and should be resisted.