You might think that the murder, by a rogue US soldier, of 16 Afghani civilians, including children, would be one of those incidents that everybody could agree was a bad thing. Well you’d be wrong.

Some representatives of the EDL have taken a break from “peacefully protesting against Islamic extremism” long enough to argue (if that isn’t an unduly generous term for their barely coherent ramblings) not only that the killings were a good thing, but that there’s a need for more, not less, indiscriminate murder by coalition forces.

Paul James, a member of the EDL and a prominent figure in the military fantasists of the self-styled “Combined Ex-Forces” (CxF), went on Facebook to crow “Got to love an american soldier.. he had the right idea.. An eye for an eye.. time to get the lads home and nuke Aghanistan.”

James’ proposal was wholeheartedly endorsed by Leicester EDL activist Lee Tams, who replied (apparently unable to find and turn-off caps lock), “NUKE UM ALL AFGHANISTAN, IRAN AND IRAQ, I CAN LIVE WITH THAT AND FK INNOCENT CIVILIANS THEY DON,T GIVE FK BOUT THEM WHEN THEY BLOWING UM SELFS UP WIPING OUT EVERY FUCKER”

Tams who works as a road sweeper at Leicester City Council later went on to explicitly advocate genocide on the basis of a batshit crazy analysis of how the war in Afghanistan might develop. “THEY ALL NEED WIPING OUT IT,S ONLY WAY FORWARD. THEY ARE ALL A BIG BUNCH OF CUNTS,ITS GONNA GET TO THE STAGE WHEN THEY ALL JOIN TOGETHER AND GET RUSSIA AND CHINA ON THEIR SIDE, WE WILL BE FKED.”

Of late, fascists desperate for a new bandwagon to jump on now the EDL’s anti-Islamic extremism schtick seems to be losing its attraction, have made a lot of noise about paedophilia. (In the process they have, of course, been careful to avoid mention of the array of paedophiles and rapists in their own ranks.) In February a rowdy protest outside the trial of a paedophile gang (who happened to be Asian) almost forced a retrial after the demonstrators apparently attacked a barrister. Quite how they propose to square their supposed opposition to child abuse with their support for a child killer isn’t clear. 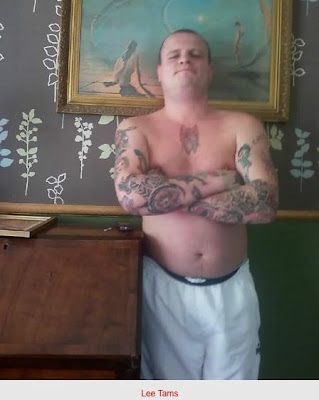